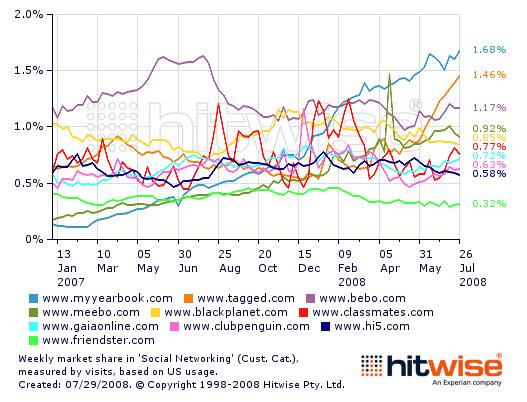 Teen social network myYearbook has raised $13 million, confirming rumors we were hearing last month. The company has managed to grow in the face of more established competitors, like MySpace, within the pre-college market, according to third-party web measurement firms. Hitwise says myYearbook had 1.54 percent of the overall US social network market share behind MySpace’s 71.92 percent and Facebook’s 16.91 percent in June. ComScore, meanwhile, says myYearbook had more than 4.5 million monthly unique visitors in June, versus MySpace’s 70.5 million and Facebook’s nearly 49 million.

Sure, Hitwise and comScore have varying means of measuring and quantifying traffic, and neither are entirely accurate. But they are worth cross-examining. The positive story that sticks out for myYearbook is that, according to Hitwise, it has grown 384 over its market share in May of 2007, making it the third largest U.S. social network. ComScore numbers are also quite positive: The firm counts myYearbook as a “teen” site and not a “social network,” and ranks it as the number one teen site in the U.S. MyYearbook claims to be popular with its users, getting them to log on eight times per month and spend 30 minutes on the site per visit on average.

For more on myYearbook versus various other types of teen sites, including full-blown virtual worlds for younger teens and other random and relatively small sites, take a look at the Hitwise graph above. (Note the numbers discrepancy due to graph being based on weekly estimates through July, versus the Hitwise numbers from June).

Can myYearbook grow up?

So, New Hope, Pennsylvania-based MyYearbook is a fast-growing, well-used niche site for teens. But it has broader ambitions. As the company says about its founders’ vision, on its site (and I quote verbatim):

Let’s face it, friendster gets boring, myspace is creepy, and classmates is a rip off. myYearbook would be the only community of people worth going to. It would have every high school, every college, every graduate school, every summer program, every employer, everyone.

Sure, MySpace’s growth has slowed, according to both Hitwise and comScore, but let’s not forget the company that myYearbook seems to have forgotten in the line above: Facebook. That company grew 30 percent in June versus the previous June, from nearly 28 million users to more than 37 million, according to comScore. Granted, I’m not sure how much of Facebook’s growth is coming from U.S. teens versus other age groups, I just doubt myYearbook is going to see much growth from those college-age and up, even if it can take more of MySpace’s teenage users.

That’s the thing. Facebook owns US college campuses and it’s leading innovation in the industry through features like its news feeds, developer platform, mobile applications and Facebook Connect. Also, Facebook is growing fast around the world.

Lest I get too down on the company’s potential, it has also been monetizing relatively well for a social network, it claims, by selling advertising packages to brands that let them reach users in certain parts of the site. I’m looking forward to hearing more about that. It also has done a nice job of integrating ways for users to decorate their profiles through its “pimp.myyearbook” section (see below). That may be a strange name for a site that has a lot of teenage users (kids these days!), but free virtual possessions such as profile flair could be a good place for the company to incorporate virtual goods that cost money. Virtual goods appear to be gaining ground among social network users, or at least they are for Facebook application developers. 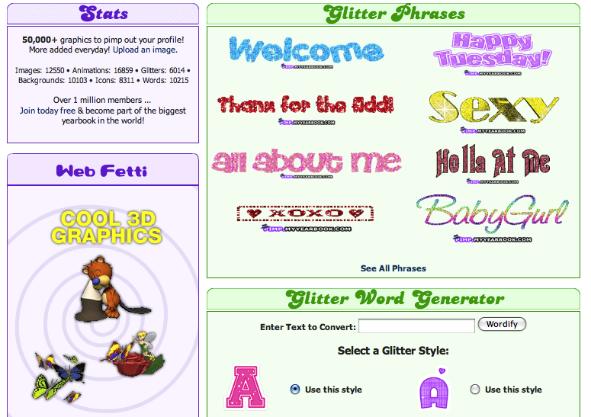 This investment round was led by Norwest Venture Partners with existing investors US Venture Partners and First Round Capital participating. The company says it will use the money to create new services and make more money.