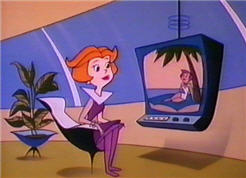 High oil prices have resonated through the economy at every level, and business travel is no exception. Realizing as much, I recently checked in with Cisco to see how well their telepresence product is selling.

Telepresence, for those who haven’t encountered it, is “a set of technologies which allow a person to feel as if they were present … at a location other than their true location,” at least according to Wikipedia. For Cisco, which took the word and slapped it on a product, that means an ultra high-end teleconferencing experience enabling one to see, as in William Prescott’s famous battle-cry, “the whites of their eyes”.

By the numbers, a Telepresence system generates some 20 gigabytes of video each second, which are compressed for transmission. The results are placed in high-definition 1080p resolution on 65-inch plasma screens, large enough to display a life sized person. Audio is multi-channel and spatially aware, so you’ll know which direction people are speaking from. And for just $300,000, you can have your own.

That’s a joke to an ordinary person, but for corporations that spend millions each year on travel costs, telepresence screens are quickly becoming a valuable substitute for in-person meetings. Other teleconferencing companies such as WebEx (now a Cisco company ) and DimDim fall short of a realistic experience. The systems have been used for soldiers to communicate with family members and home, and a potential next step is to move them into healthcare for remote diagnosis.

Cisco’s telepresence product has become the company’s fastest-growing product ever, at least according to senior director of emerging tech David Hsieh, whom I talked with on — what else — a Telepresence screen. There are now about 500 customers which, considering the price tag, is no small number. Most have installed multiple systems. 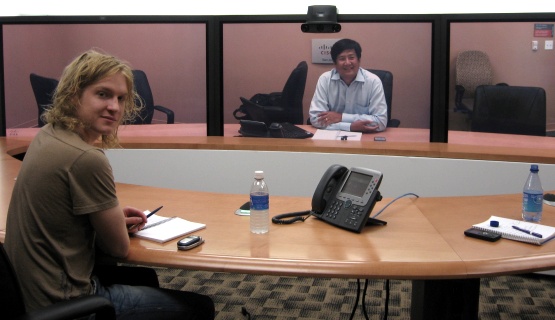 Even more interesting is the next generation of technology that is coming, which Hsieh was happy to speculate about. Right now, almost all Telepresence systems are set up to emulate small rooms, with around six to 12 participants. However, Cisco is working on a multi-point system that can support up to 72 screens and 300 people, enough for a company-wide meeting or small conference. A giant-sized version for use in auditoriums has already been demoed.

In a year or two, Hsieh believes a single-screen consumer product will be ready for around $35,000. This was recently echoed by CEO John Chambers during Cisco’s quarterly conference call. For those who can’t shell out the price of a nice car on a video screen, public kiosks will be available, starting a high-end hotels.

A little less than a decade ago, pundits were predicting a video revolution, which would take over our daily lives and have us all communicating by video messaging. Years later, it hasn’t happened, and moves like Yahoo’s almost $6 billion acquisition of Broadcast.com in 1999 look pretty dumb. But my feeling is that the high-end market success of Cisco’s Telepresence, not to mention competing products from HP, Nortel and others, have a deeper meaning. 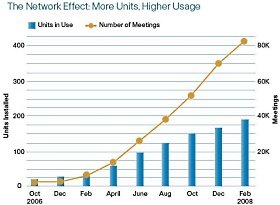 Transportation costs are likely to stay high, so the business case for web communication will only grow, especially as companies become more international. Internet technology advances further, and the economics of video become better known. WebEx was certainly a success, but there could be even more potential for newer entrants, such as the aforementioned free web meeting service DimDim, but also video messenger Goldmail, and others.

For consumers, there’s also reviving interest in video for personal communication. Video chat service TokBox, for one, recently got more funding (although I’ve questioned the company’s potential in the past). There’s also the simultaneously lauded and maligned blog commenting service Seesmic, which is tangentially related. Multi-media messaging, some with video, is on the rise in mobile phones.

But part of what Hsieh suggested about Telepresence is that there are many uses that designers have yet to figure out for video, especially high-quality video. For a real video revolution, the new generation of innovators may first have to arrive.