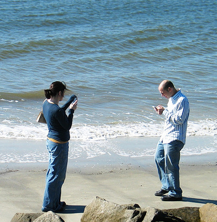 I can’t begin to tell you how happy I am that The New York Times decided to take on the colossal rip-off that is text messaging in a story this weekend. Text messaging is a great service, but it should be included for free with your “unlimited” data plans. Instead, carriers charge an absolutely ridiculous rate to send a tiny amount of data.

It took the iPhone 3G price change to realize what a rip-off it was, but as you can tell from the New York Times piece, the carriers have been playing a dangerous game bordering on price-fixing with the technology for quite some time now. I’ll highlight some of the best parts of their article below, but be sure to check out the entire thing.

All the major carriers decided to raise the text message rates in harmony at a time when business was exploding:

All four of the major carriers decided during the last three years to increase the pay-per-use price for messages to 20 cents from 10 cents. The decision could not have come from a dearth of business: the 2.5 trillion sent messages this year, the estimate of the Gartner Group, is up 32 percent from 2007. Gartner expects 3.3 trillion messages to be sent in 2009.

The chairman of the Senate antitrust subcommittee, Senator Herb Kohl of Wisconsin, requested information on the pricing from the major carriers but received vague or misleading responses. The New York Times, in writing their piece, got even less of a response. But 20 current class action lawsuits filed against the carriers alleging price-fixing for text messaging should help with that.

T-Mobile and AT&T tried to say that costs-per-message are unimportant because most people buy text messaging bundles, which take costs-per-message way down. And T-Mobile said that the average revenue per text message has declined by more than 50 percent in the past several years. But it leaves out a key point: Usage has grown about tenfold over that time — yet costs for the carriers to handle that explosion have not risen.

The reason is that not only are text messages very small amounts of data, but they have their own control channel in the wireless network — and this channel is being used by the carriers in their operations whether a text is being sent or not. As Srinivansan Keshav, a professor of computer science at the University of Waterloo tells the Times, “Operating costs are relatively insensitive to volume. It doesn’t cost the carrier much more to transmit a hundred million messages than a million.”

As the Times continues:

Until Mr. Kohl began his inquiries, the public had no reason to think of the text-messaging business as anything but an ordinary one, whose operational costs rose in tandem with message volume. The carriers had no reason to correct such an impression.

But the best part is the final paragraph:

Customers with unlimited plans, like diners bringing a healthy appetite to an all-you-can-eat cafeteria, might think they’re getting the best out of the arrangement. But the carriers, unlike the cafeteria owners, can provide unlimited quantities of “food” at virtually no cost to themselves — so long as it is served in bite-sized portions.

I expect that the carriers are eventually going to have to include text messaging as part of their “unlimited” data plans. Some, like T-Mobile, already do for select plans. The fact of the matter is that in a world of unlimited internet on mobile phones, it’s getting harder for the carriers to hide just how much of a rip-off text messaging is and how much money they’re making from it. I pay $30 a month for “unlimited” data, why should I pay $15 a month on top of that for unlimited text, when it really costs the carriers practically nothing to give it to me?

The fees they charge are hampering services like Twitter in just about every other part of the world, and you can bet that eventually that will be a problem here as well unless the system changes. Otherwise, eventually, some other technology, probably one over the internet, will rise up and take text messaging’s place. Call it death by greed.