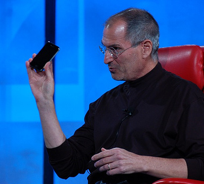 Apple product rumors are really unlike any other. People (myself included) get all excited over patent filings. Users foam at the mouth over Photoshop product mock-ups that border on comical. Some even get whipped up into a frenzy over carrying cases (such as yesterday with the supposed 3G iPhone case). These rumors often start months — or even years — ahead of a product launch (if there even is one), but the mayhem doesn’t usually really even start up someone “confirms” a launch date. Today we have that for the 3G iPhone.

Gizmodo says it has a source “very, very close to the 3G iPhone launch” (that’s two “verys” for you keeping score) who knows when the device will be unveiled: June 9. That is of course, the day of Apple chief executive Steve Jobs’ keynote at Apple’s WWDC event. It is also the day analysts have been speculating on for a couple months now, and yes, the date we’ve been predicting even when others said the 3G launch was “imminent.”

Some of the details Gizmodo includes are much more interesting. The biggest of these is that the device will be available worldwide right after the launch. Some are taking this to mean that it will be immediately available that day. This could potentially cause a dangerous situation for anyone going to the WWDC keynote as journalist and fanboys would no doubt engage in a heated race to the nearest Apple store as soon as Jobs leaves the stage.

I’ll stick with my earlier prediction that Jobs’ announces it at the keynote and says it will be available within a couple of weeks in the United States — in the window AT&T gave its employees: June 15 to July 12th. I wouldn’t be surprised with another Friday launch (as Apple did for the initial version of the device last year), so everyone could have an opportunity to get their hands on one.

Gizmodo also gives details about a launch in Spain that will take place on the 18th of June. It will be available at the grand opening of a Telefonica store in Madrid. A nationwide roll-out would follow that. The other European countries are said to have similar roll-out schedules.

With worldwide launches so close to one another, Apple clearly has a lot of the 3G iPhones ready to ship — and it better. If the device is in fact subsidized by AT&T in this country, the rate at which it sells should be breathtaking. Just think of how quickly the first generation $599 iPhone sold last year. Now we have a 2nd generation version for potentially $199.