One of the first applications I downloaded through Apple’s new App Store for the iPhone and iPod Touch was called Box Office. As you can probably guess, it uses your location to find movie times and theaters around you. I’ve used it a couple of times already to catch a movie; it’s worked great. I’d recommend you download it but there’s one problem: It’s been pulled from the App Store.

At some point this weekend, Apple apparently yanked the application, The iPhone Blog noticed. No one is really sure why yet — not even the developers. Developer Cyrus Najmabadi left the following note in a MacRumors Forum:

I’m the developer of BoxOffice.

Apple pulled the app yesterday without giving my any notification that they were doing it, or what their justification was for removing it. 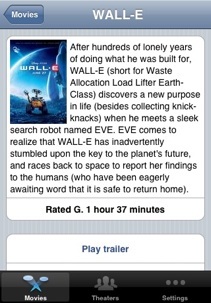 I’ve tried to contact them about the issue, but it’s been a complete dead end. If anyone has a useful contact number for apple, please let me know.

I’m in regular contact with all my data providers, and none of them have had an issue with my app. Indeed, the response was the exact opposite. They like my app and have even asked if i would do custom application work for them in the future. Furthermore, all the data i use is licensed by the owners as ‘free for non commercial use’. i.e. precisely what BoxOffice is.

So i’m stuck here not knowing what has happened, or what i can do about it. If any of you have any ideas, please let me know. You can respond here, but i’d actually appreciate a reply at cyrusn@stwing.upenn.edu since i probably won’t check back here that often.

One commenter on the developer’s own Google Code project page guessed:

Isn’t open source and your GNU licensing a violation of Apple’s SDK…? That’s my bet on why you were yanked from iTunes.

Whatever the reason, these programs getting pulled from the App Store is becoming worrisome. Just since the store’s launch last month, the popular game Aurora Feint has been pulled after a security issue was uncovered (which was corrected and the game came back to the store quickly) and the tethering app NetShare has been pulled, then put back, then pulled again with no explanation. There has been very little communication with the actual users who downloaded the application. 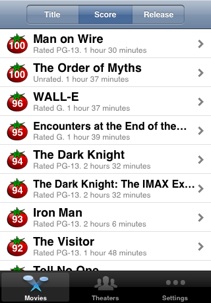 Maybe this latest one is a security issue or maybe it’s not, but shouldn’t Apple tell someone what is going on to stop the speculation? Certainly, if it is a security issue it should let all those users who downloaded the application know to stop using it.

The location-based social network Loopt is another application that had a security issue shortly after launch. It fixed the issue quickly, but it makes you wonder what exactly Apple is checking out in examining each application before they get accepted into the App Store?

Box Office was great because it easily allowed you to find and buy movie tickets. It also had a special place in my heart because it used the movie review aggregation site Rotten Tomatoes to tell you which films were worth seeing in the first place. I’m sad to see it go, but I have a feeling it will be back whenever Apple lets it know what exactly the problem was.

Update: I just heard back from Najmabadi who says he still hasn’t received any word from Apple on the situation.