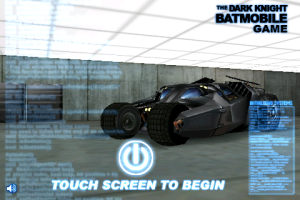 In some circles, today is “Dark Knight Day.” That is, the ultra successful Batman film, The Dark Knight, was released on DVD and to digital stores like iTunes today. And people were apparently excited enough about the release to make it the top-selling film on iTunes for all of 2008 — before it was even released (thanks to pre-sales). For those who were thinking about celebrating Dark Knight Day with The Dark Knight: Batmobile iPhone game based on the movie, I have one word of advice: Don’t.

While the game may sound and look great, it’s unfortunately all style and no substance. The best way I can describe it is as a tutorial for how to use the iPhone’s touchscreen and accelerometer — and a bad tutorial at that.

You may think this is a game where you get to race the Batmobile around the streets of Gotham, but actually you only get to tap the screen a few times, pretend to steer using the accelerometer and align the car properly while it soars through the air. It’s like being on one of those car rides that runs on a fixed course. Yawn. 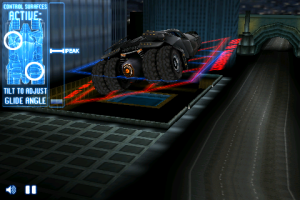 Worst of all, the game is one level — unless you do everything perfectly, at which point there is the promise of a “bonus round.” After a few unsuccessful attempts to get this one boring level down perfect, I decided it wasn’t even worth my time to attempt it anymore, as the bonus levels were undoubtedly as boring as the regular level.

The game, which was made by Warner Brothers (the film studio behind the movie), is actually overpriced at $0.99. This is little more than a piece of promotion for the film — it should be free. I would argue that it’s not even as good as the last bit of iPhone promotion for the film — the HaHaHa app in which you take a picture and manipulate it with Joker-style graffiti. At least that app was free.

If you find yourself on iTunes today, get The Dark Knight movie, not the game.