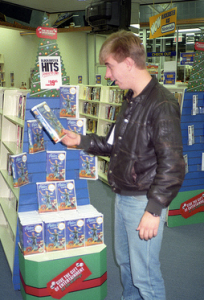 Trading of Blockbuster stock was halted today after its share price plunged more than 77 percent, all the way down to the miniscule $0.22 a share. Why the bloodbath? Bloomberg says the movie rental company has hired a company to explore Chapter 11 bankruptcy filing, according to Tech Trader Daily.

It’s not like we didn’t see this one coming (and predict it). Blockbuster has really been dying a slow death for a long time thanks to its slow reaction to the changing market. At a time when movie rental-by-mail service Netflix, is extremely popular, Blockbuster still has over 7,500 brick and mortar stores — stores that are expensive to maintain. Blockbuster did get into the DVD-by-mail business, but too late to make a dent.

And now things are shifting to streaming rentals and purchases over the Internet. Netflix is once again a leader in this pack, while Blockbuster didn’t think it was important. When Blockbuster realized its mistake, it reversed course quickly, but with an inferior set top box product for the living room.

Instead, Blockbuster decided it needed to focus on its stores and making things like kiosks — yes, kiosks — where customers could load up digital movie players with movies. But if you’re going to digitize the films, why not just send them over the Internet directly to customers? Why make customers trek into stores to get them? More recently, Blockbuster had promised to open up the digital distribution floodgates, but gave no real details about what that really meant.

Even more hilarious was Blockbuster’s attempt to buy Circuit City last year. No one seemed to understand that deal, and Blockbuster eventually pulled out. It was a good thing too, because that company filed for bankruptcy last year, and is now completely out of business. Perhaps buying Circuit City would have just quickened the fall for Blockbuster.

If it does get its Chapter 11 protection, Blockbuster needs to do something drastic to save itself. Something like cut a deal with Nintendo to get its online service on every Wii already sold. Otherwise, there may be no due date on this return.

Update: A Blockbuster spokesperson now is telling Bloomberg the hiring of Kirkland & Ellis LLP was for “refinancing and capital raising initiatives.” “We do not intend to file for bankruptcy,” she continued.