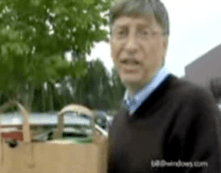 The first post-Seinfeld/Gates Microsoft commercial has just aired. The theme is simple, various people from all walks of life saying “I’m a PC,” and then telling a little bit about who they are. It’s a direct challenge to Apple’s “Mac vs. PC” ads, but doesn’t try to emulate it directly except in the opening — which is smart.

I’d say this ad is at least 10,000 times better than any of the Seinfeld/Gates ads. First of all it makes sense, but more importantly, it’s not trying too hard. Celebrities including actress Eva Longoria, her husband, basketball star Tony Parker, musical artist Pharrell Williams and even Bill Gates are sprinkled into the mix, but it’s done discreetly enough. If you look closely, you can even see Gates’ email address shown on the screen during his part (bill@windows.com).

The focus is on real people, who do real things. I know sometimes it’s hard to believe given the negative press Microsoft gets, but most of those people really do use Windows after all.

Now, how long until paparazzi shots of Pharrell or Longoria using Macs turn up on the Internet? I give it two weeks.

Watch the ad below:

Update: As Twitter user projct half-jokingly asks, “How many of the I’m a PC people in MS’s version use vista?” That actually seems like a fair question. Vista is never mentioned once. Only the word “PC.”