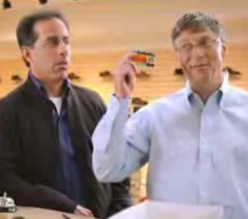 Here it is. The first Microsoft advertisement featuring comedian Jerry Seinfeld. It’s not clear yet if this is the one directed by French director Michel Gondry. But I hope not, because it’s really not very good.

The advertisement is Seinfeld and recently retired Microsoft founder Bill Gates spending some time shoe shopping in a mall. I guess the idea is to play off the humorous everyday man video that was put together for Gates’ last day at Microsoft, but this has an odd tone to it. Seinfeld and Gates are like The Odd Couple, but awkwardly odd.

I have a feeling we’re going to be seeing a lot more of these Jerry and Bill segments. Let’s hope their chemistry improves.

At one point Seinfeld says, “Guess what Bill, you’re a 10.” I think I know what they were going for there, but whoever decided to use that line needs to be reminded this is 2008. I don’t think I’ve heard that since Seinfeld — the show — was on the air and Windows 95 was dominating the operating system scene.

I will give them this, using Bill Gates’ mugshot from an arrest for a traffic violation in 1977 on his Clown Club card is kind of funny.

The tagline for this one: “The future. Delicious.” I think this is more “yuck” than “yum.”

What do you think? Watch the video, found via The Raw Feed, below.