If you’re like me and split most of your “online time” between your smartphone, your computer’s chat client and your Facebook/LinkedIn page, Nimbuzz may be for you.

It’ll make all those communications smoother.

My Facebook friends sometimes leave me wall messages that I take forever to respond to. Now they can call me or chat with me directly via a widget embedded on my Facebook profile page. The Nimbuzz widget detects presence and shows if I’m online. If I’m offline, Nimbuzz also includes a “Buzz” feature to alert me that people are trying to reach me. The head spins with the potential for abuse of this well-intentioned feature, though. Calling me from overseas from a PC? Nimbuzz can help. Sending international SMS? No problem, you can use Nimbuzz. Theoretically, you could use some combination of Meebo/ebuddy/Trillian, Skype, Fring and your phone’s native IM/text messaging to do all that, but Nimbuzz packages it well and makes it simple. Simplicity comes from the unified interface across devices; I don’t have to import IM contacts into Skype and vice versa, for example. 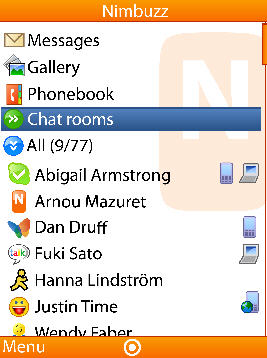 Conversely, the service makes it even harder for technology junkies to unplug to enjoy downtime, but that’s a separate post.
The company has recently launched a phone, chat and file swap application that works across desktop, email, social network and mobile phone environments.

If your head’s not spinning from these features, well, it should be. Nimbuzz really is doing a lot; the question may be whether it’s doing too much.

While lots of companies are working on some combination of voice and IM features, Nimbuzz’s differentiation is its support for a wide variety of mobile handsets (currently at 500 devices with native support for Symbian and Windows Mobile) and good integration with several social networks. I downloaded the Nimbuzz social networking widget here, which made it brain-dead easy to add a Facebook application to my profile page. I was able to send messages and files from Facebook to a mobile phone Nimbuzz client as well as to a Windows desktop version of Nimbuzz. Call quality was good enough for day-to-day usage.

On the down side, I did find the Windows desktop program clunky in comparison to other similar applications like Skype for voice calls and Trillian for instant messaging. Another downer: If you own a Mac, you’ll have to rely on the web-based client.

Nimbuzz’s new release features everything and the kitchen sink: It provides PC to PC/mobile calling, IM aggregation across several communities, group chat and conferencing, free voicemail, file sharing, a Facebook application, a social networking and email call/chat widget, a WAP site, a Symbian/Windows mobile application as well as a desktop program. It also goes without saying that the company is working on an iPhone-specific version. But competitor Fring recently launched a nifty VoIP client for iPhone and beat Nimbuzz to the finish line.

While the company has seen reasonable traction thus far — it says it has 500,000 registered users and 10,000 daily software downloads — it says it hopes to capture 10 million users by the end of the year with the upgraded product suite. The company is also attempting to do distribution deals with European carriers as well as regional European social networks like StudiVZ. The current launch is restricted to the UK with expansion plans in five major European markets.

Nimbuzz is operating in an extremely cutthroat space (Tariq Dag Khan, the company’s CMO, claims to know of at least 130 direct competitors!) — and the recent demise of Jangl may point to a similar fate for many such free-call startups. The company must also take on that entrenched 800-pound gorilla named Skype. We’ve previously mentioned Nimbuzz as complementary with free conferencing services like Lypp (our coverage), which are also part of the landscape.

Finally, the company needs to grapple with mobile carriers that are bound to be nervous about the cannibalization of their existing voice business. After all, when users start making mobile VoIP calls over a WiFi network, their cellphone minutes usage will fall. This situation is made worse in the U.S. because carriers generally offer unlimited data plans for smartphones such as iPhone and Blackberry. Little wonder, then, that Nimbuzz isn’t addressing the U.S. market for now. While acknowledging these problems, Khan mentioned that there are several forward-looking European carriers that treat mobile VoIP as an opportunity to increase data usage.

Nimbuzz is funded by Mangrove Capital Partners SA, which also funded Skype. The company also took funding from Holtzbrinck Ventures and MIH Group. The company is based out of Rotterdam, Netherlands.