True to its name, Yahoo’s social voting news site Buzz has garnered a lot of buzz since its launch back in February. But tonight, as the site truly opens up to the public for the first time, we’ll see if its worthy or not.

Previously, only sites accepted by Yahoo into the Buzz testing program could have stories submitted to the service. These were mainly larger, established sites (VentureBeat was one of them). Now any site’s stories can be submitted. This should make the service much more like Digg — but with some twists.

Votes are not the only factor that determines a story’s buzz-worthiness. Number of times email and search frequency also apparently play into the mix. This makes it more like the newly revamped Propeller (formerly Netscape). Buzz will also eventually leverage Yahoo’s other properties such as Delicious and Flickr for content, according to Webware.

Human editors pick the best of the stories with the most buzz and can place them on the “Top Buzz” page or, more importantly, the Yahoo homepage.

That is of course the real prize, and likely the only reason we are talking about this service right now. Hitting the Yahoo homepage from Buzz has brought varying reports of tens of thousands to hundreds of thousands to even millions of hits. No site is large enough to scoff at that and for the smaller sites that can now get access, that may be the dream come true.

In fact, attempted gaming of the Yahoo Buzz system could become a major issue. But the use of human editors should help curb that threat. 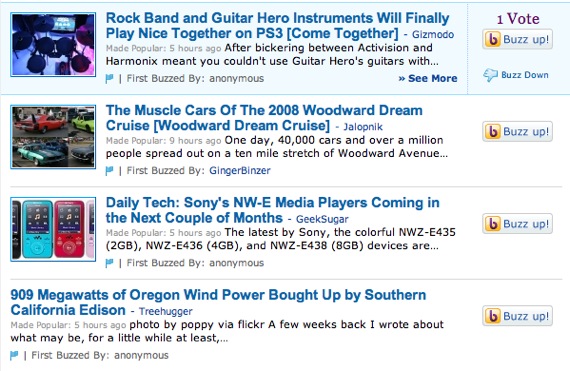 Of course, I still don’t know anyone who actually uses Yahoo Buzz, despite the service’s claim of 5 million users. Even more shocking to me was the recent comScore data which showed that Yahoo Buzz was actually bigger in terms of traffic than Digg. Stories on the Yahoo Buzz main page tend to have far less votes than stories on the Digg main page, so it’s not really clear what everyone is doing at the site. I would say clicking on links, but we’ve had stories submitted to the service plenty of times before (though none that have hit Yahoo’s homepage), and it’s really not that much traffic.

Buzz still seems like a slightly more complicated and less open version of Digg. Without the lure of the Yahoo homepage, it would likely just be and afterthought, kind of like another service Yahoo runs, the technology news aggregator BuzzTracker. But that lure should be big enough to keep it going — and might just be enough to convince Google or Microsoft to finally buy Digg. Or at least build their own version.