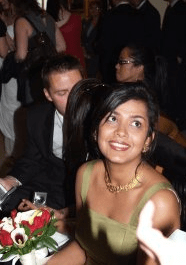 The Googlers keep exiting, one by one.

Priti Choksi, a director of strategic partner development at Google whose team handled a lot of distribution deals for for the search giant, including one for the Google toolbar, has just accepted an offer to head business development at Facebook, VentureBeat has learned. We’re told her colleagues consider her “sharp.”

Choksi (the picture left is from her Facebook profile, natch) is just the latest in a wave of executives who have left in recent weeks, in part because the company’s stock hasn’t gone anywhere for two years (see the chart below). Startups like Facebook, meanwhile, give you a chance to hold private shares that one day could be worth a whole lot more than they are now. With Facebook’s shares likely being doled out a discount price because of the economic downturn, it’s arguably a good time to join the company — you pick up shares at their low, and see them appreciate quickly when the economy rebounds. Everyone knows Facebook is going somewhere.

As we’ve reported, Google recently appears to have hit the end of its golden era, losing its touch when it comes to retaining its most prized employees. Omid Kordestani, the company’s first real business guy (the first one to wear a tie) recently stepped down. Preceding him in just the past few weeks were Tim Armstrong, the company’s leading salesman, who left to take over AOL; Gonzalo Alonso, a Latin America sales chief, who joined a local company down there; and Sukhinder Singh Cassidy, the Asia-Pacific and Latin America operations president, who joined Accel Partners.