Cecilia Aronsson, a Swedish business reporter, is a fellow at the Innovation Journalism Program at Stanford University. Through July, she’ll write columns for VentureBeat.com about her experiences in Silicon Valley. Here’s her first column. 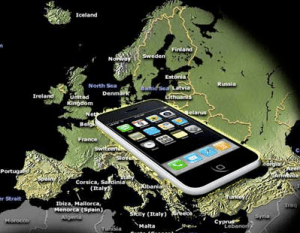 The European business press is speculating that the next market Apple plans to target with its iPhone is Sweden, a hotbed of mobile innovation and the home of rival mobile phone maker Ericsson. But I was tagging along with 15 leaders of the Swedish telecom and computer industry yesterday as they visited several Bay Area technology companies, and from what I heard, it sounds as if Apple may not understand the Swedish market.

Apple’s strategy so far has been to hook up exclusively with one mobile operator per country (AT&T in the US). The iPhone only works with AT&T’s SIM card (the card that contains the user’s data).

In Scandinavia, though, things are different.

Norwegian Jon Johansen was one of the first to hack the iPhone after its release last June to get it to extend beyond AT&T. Hacking iPhones has now gone commercial with services and software like iPhoneSimFree. Hundreds of iPhone handsets are already on sale on Sweden’s equivalent to Craigslist, Blocket, priced at around $600.

Rolf Persson, a senior IT consultant in charge of the Swedish delegation, told me about his grandchild who has already changed mobile phones ten times before the age of 14. The kid recently bought a fake version of the iPhone, imported from China, with no operator strings attached. There are currently more fake than real iPhones circulating in Sweden, according to Persson.

According to Swedish technology newswire Ny Teknik, Apple will be introducing the iPhone in Sweden before summer. Its Swedish partner operator will most likely be TeliaSonera, the largest national service provider, which runs on an EDGE network just like Apple’s other European partners, O2 and T-Mobile.

The iPhone started selling in Europe last fall. So far it’s officially available in France, England, Germany, Austria, and Ireland, where it was introduced less than a month ago. Demand has been strongest in England, where the exclusive service provider, O2, sold 30,000 handsets in just the first week. Total sales of 200,000 were recorded at the end of January. French sales have been just okay, reaching a total of 70,000 phones by the beginning of 2008, close to predictions by French iPhone operator Orange, according to Apple.

Germany, however, has been a very weak iPhone market so far. The number of phones sold are about the same as in France, despite the fact that Germany is a much bigger market. The exclusive provider, T-Mobile, just announced a huge price reduction to $155 from $625 for the 8 gigabyte iPhone. Buyers have to agree to a two-year monthly subscription fee of $140 per month — almost as much as the phone itself. The question is whether this will spur sales or remain so expensive that it estranges Apple’s handsets from serious European consumer consideration.
One third of the iPhones sold in Europe are unlocked after purchase, according to Ny Teknik. Still, Apple CEO Steve Jobs is holding on to the initial strategy of one single partner per country. Why so stubborn, Jobs? Of course it’s tempting to copy the revenue model the company has in the US with AT&T, where Apple gets $80 for every phone sold plus an additional $10 per month from subscription fees for two years. However, if that strategy leads to a growing number of iPhones being unlocked and used with other operators, the returns are going to shrink significantly for Apple down the road.