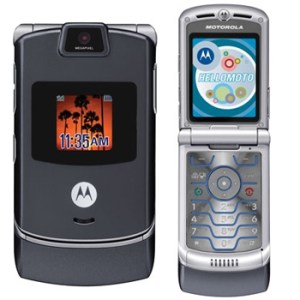 About four years ago Motorola’s RAZR was the sexiest phone out there. I remember waiting with bated breath for the CDMA (a wireless technology) version, so I could use it with my Verizon account. Times have changed.

Now, of course, the RAZR seems like a relic of the past, but that doesn’t mean they’re not selling — they are, like crazy. So it’s big news when the new sexiest phone on the market, Apple’s iPhone, surpasses it in sales, which is exactly what happened in the third quarter of this year, according to a new study by The NPD group.

The data, which is for U.S. adult consumers (meaning not corporate or enterprise users), shows the iPhone as the first phone to overtake the RAZR after 12 consecutive quarters at the top — yes, three straight years of RAZR dominance is at an end.

What’s pretty amazing is that the iPhone costs $199 (or $299 for the version with more storage), while the RAZR has been free (or basically free, with a signed contract) for the past several years. Also of note is that among the top five handsets on the list, four are what could be considered smartphones, or phones optimized to handle the Internet and email — the RAZR is the only exception. Clearly, there’s a trend there.

I just dug my RAZR out of a storage box it was in (I’m not actually using it as a paperweight…yet), about the only thing nice I can think to say about it is that it’s very thin. And that was of course most of its appeal when it first came out, but times have changed. Phones are becoming mobile computers, and after a year and a half using the iPhone, there is no way I could ever use something like the RAZR again.