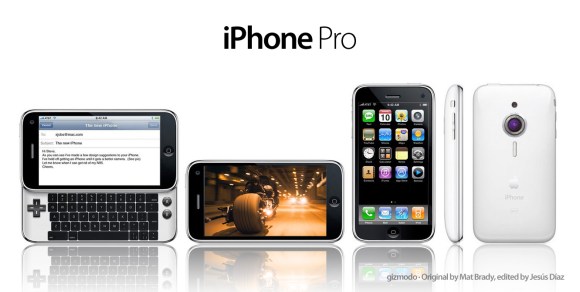 Is the above image real? No. Does it look awesome? Yes. Would I want it? Of course.

Well, most of it at least.

While Gizmodo did a nice job creating a mock up of an “iPhone Pro,” I have to take issue with their inclusion of a physical keyboard. While I know many of you BlackBerry lovers out there still insist that the iPhone needs a physical keyboard, I’ve got some bad news for you: It’s not going to get one. Nor should it.

Adding that keyboard to the iPhone would create a whole bunch of issues, aside from simple technical feasibility. You see, creating a keyboard that is fixed on one side would lead to problems similar to what some applications built for the G1 Android phone have. That device, like the iPhone, can orient itself based on which way it’s being held, but some apps, like Loopt, simply break when held the wrong way because of the keyboard. There are hundreds if not thousands of current iPhone apps that would have the same problem.

Does typing on the iPhone’s keyboard take some getting used to? Sure. It took me a few days to get acclimated. But now, after using it for about a year and a half, I’m much faster with it than say, the G1’s crappy keyboard.

And virtual keyboards are only going to get better. The BlackBerry Storm has a clickable keyboard that people either love or hate, but the more exciting technology will be haptic feedback, a mechanical simulation that makes your fingers feel like they are touching a physical object that isn’t really there — like say, keys. You better believe that is coming to the iPhone.

So give me the larger screen, more storage and a better camera. But hold the keyboard, I’m fine with the virtual one — and one day you will be too.