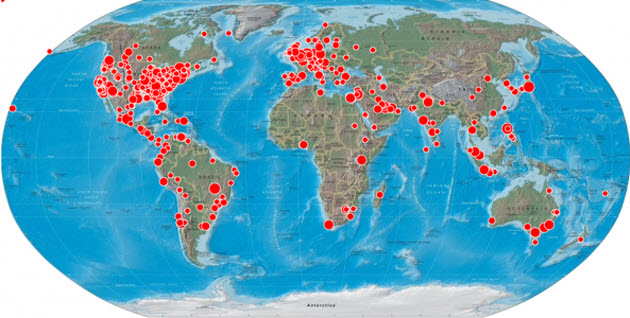 The map above shows just how fast it all happened in the first 12 hours after the first tweets about the killing of the world’s most-wanted terrorist, starting around 7:30 pm Pacific time on Sunday. Sysomos said that its social media monitoring tool measured the spread.

Sheldon Levine of Sysomos said that about an hour and fifteen minutes after word started spreading, and just as President Obama finished his address, there were more than 500,000 tweets, 796 blog posts and 507 published news articles. About 2.5 hours after the news broke, there were 860,177 tweets, 3,079 blog mentions, and 3,235 news stories.

Within 12 hours, more than 40,000 blog posts and news stories had appeared. And the news had been tweeted more than 2.2 million times. The map shows that people in the U.S. were tweeting about it the most, but other regions of the world were doing so as well. About 63 percent of the tweets came from men, and 37 percent from women.

At 8 am Pacific time on Sunday, a Twitter user living near bin Laden’s compound in Pakistan, Sohaib Athar, unwittingly liveblogged the helicopter raid on the bin Laden property. Around 6:45 pm, White House communications director Dan Pfeiffer told the press corps that Obama would make an announcement at 7:30 pm. At 7:25 pm, former defense secretary chief of staff Keith Urbahn tweeted that he had been told by a reputable person that Osama bin Laden had been killed.