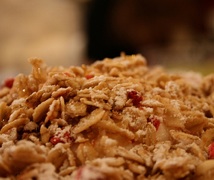 With Yahoo in Microsoft’s rearview (for at least a couple months until it doubles back), the acquisition gaze shifts forward. We laid out a few names over the weekend. One of them: Facebook. Now word is already coming in that the social networking site may be bubbling to the top of Microsoft’s list, according to BoomTown’s Kara Swisher.

There isn’t too much to go on yet. In fact, Swisher only mentions this possibility briefly in her larger post about Microsoft’s “Project Granola” (the nickname for Microsoft’s online strategy post-Yahoo), which may be the most bland nickname ever (both in name and in taste). Swisher reports that Microsoft’s bankers are putting out subtle signals at this point that the software giant would perhaps like to buy a larger stake in the company (Microsoft already owns 1.6 percent) — like all of it.

Some Microsoft execs are also said to be tossing out the idea to Facebook execs. “We just want to gauge their interest, more than any real effort,” a source tells Swisher. This sounds a lot like, “we don’t want to get publicly burned again if we’re barking up the wrong tree.”

Rumors swirled last year about Microsoft buying Facebook prior to what ended up being a $240 million investment. Naturally, Google was said to be the other party in pursuit of a stake in the social networking company, but lost out when Microsoft’s deal put Facebook’s total value at $15 billion. Microsoft does have significantly more than that laying around now thanks to the failed Yahoo bid. It would probably use it, but Facebook is still thought to have its loftier IPO goals. As such, these rumors are likely to stay rumors, but don’t expect them to go away until Microsoft makes that next big purchase we all know is coming.