In what I can only assume is some sort of new viral marketing campaign, Microsoft is promising to show off something called the “Mojave Experiment” tomorrow in San Francisco.

The site claims it will be showing off the “next Microsoft OS codenamed ‘Mojave'” which one would assume is Windows 7, but then it goes on to say “but it’s actually Windows Vista.” Both Techdirt and Engadget say this is a prank to drum up buzz for Vista. Our source says we should find out around midnight tonight.

It sounds like this will be one of those blind taste test experiments of sorts with Microsoft tricking people into thinking their seeing a cool product of the future — in this case Windows 7, when in fact it’s a product already out there: Vista.

Microsoft is in the midst of revamping its marketing strategy after getting slammed by both the press and users for products such as Windows Vista for much of the past year. Will this Trent Reznor-esque strategy work? Ask me after the experiment is up…

Update: As CNET talked about previously, the Mojave Experiment is in fact what I detailed above. Users were shown a copy of the “new” operating system and asked about it. More than 90 percent gave positive feedback on what they saw — only to have it revealed that it was actually Windows Vista.

The problem, as CNET notes, is that Vista did often look good in demos, but when it came down to using it, it was a hassle for many users. No viral marketing can change that. 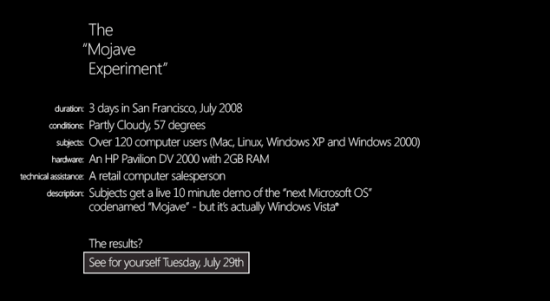