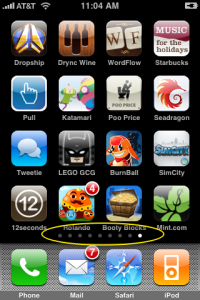 Today I ran into a problem — I downloaded a couple new iPhone applications to test out, but when I looked on my iPhone they were nowhere to be found. A sync problem right? Wrong. Actually, I had hit the limit of apps that Apple allows you to put on your iPhone — nine pages worth.

I had been avoiding this for the past several weeks by un-checking boxes for certain apps I don’t use anymore in the iPhone syncing part of iTunes, but I simply couldn’t avoid it any longer. While most people will not have nine full pages of apps that they need on their iPhone right now, eventually, they may. After all, the apps coming out for the device (with the exception of the fart joke-based variety) seem to be getting better and better.

Hell, some people may find themselves with just nine pages worth of games on the iPhone and iPod touch next year.

Apple is going to have to raise this nine page limit — and it will — but that leads to a couple larger, long-term issues. First of all, Apple is going to have to change the iPhone app “pages.” Scrolling from side to side over nine pages is ridiculously tedious. Thankfully, Apple finally added a feature in the iPhone 2.2 software update that made returning to the home screen of the iPhone only one click away, but navigating the rest of the pages is just as big of a pain.

Apple should save these “pages” for only your favorite apps, the ones that you want to access with the minimal number of clicks. The rest of the apps should reside in some soft of folder or file system. Yes, I know this sounds kind of Windows-y, but think of it in terms of how OS X is currently set up. All of you applications reside in the “Applications” folder and you put only your favorite ones in your dock for easy access — the iPhone should be the same way. 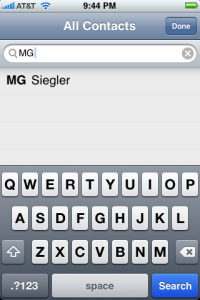 But that leads to the second, larger issue. The iPhone needs application search. Scrolling side to side through nine pages to find the one app you want is too time-consuming. There should be a spotlight-like search feature that searches your apps on-the-fly as you start typing. For example, if you type “P” it may auto-fill in the Pandora application as your suggested query. Maybe it could even tailor this on which apps you use the most.

If Apple does go with a folder system for the iPhone, search is absolutely a must. It will provide access to apps buried away within a few clicks, and it could also be set up to search your music and movies on the device as well. Again, just like Spotlight on Mac computers.

In fact, this Spotlight-like search tool for the iPhone was my guess for what Apple was working on when there were rumors of an Apple search engine of some sort last month. It makes sense; the iPhone is becoming less of a phone and more of a mobile computer — and it needs some of the basic functionality that computers have, like file search.

Those of us who own an iPhone or iPod touch are going to download a ton of new apps in 2009 — remember, the App Store has only been live for about 6 months and already we’ve collectively downloaded the 10,000+ apps over 300 million times. While I may not be indicative of the average iPhone user, sooner rather than later, users are going to start coming up on the nine page limit problem. We’re going to need a better way to organize the apps.