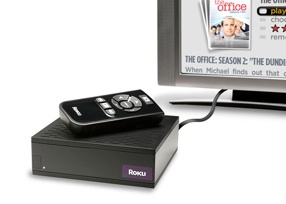 After a lackluster start, things were starting to look good for the Apple TV device. With its 2.0 software update, the media streaming device was able to rent or purchase movies directly to television sets, play HD movies and thanks to a deal Apple cut with the major movie studios, had plenty of content. Just to top things off, Apple even cut the price of the device by $70. It finally looked like it could work.

It’s not looking so great now.

Tomorrow, Netflix will unveil a set-top box made by Roku. The living-room bound device will allow subscribers to the Netflix online DVD rental service to access thousands of movies and television shows instantly — for free. The device will be $99. Even after January’s price cut, the cheapest version of Apple’s device is $229. This could be big. Very big.

Sure, with the Roku device customers are still paying via their Netflix subscription fee (typically around $20-a-month), but they’d be paying that regardless. All those customers must do now is spend a one-time fee of $99 and they’ll be able to access around 10,000 titles at any time.

This current slate of 10,000 “Watch Now” (the name of its instant viewing service) titles may not seem like a lot when you consider that Netflix has over 100,000 DVD titles available. However, the number looks pretty robust when compared to the number of titles you can regularly watch on the Apple TV for free: zero.

The Netflix/Roku system won’t be without its flaws. As CNET points out, thanks to Hollywood’s licensing system, only two of the current top 100 DVDs on Netflix are available to watch instantly (you can currently use the service on a PC). Simply put, most of the titles available will be catalog films (movies that have been out for a while). Still, if I were a Netflix subscriber and these were free, I would have no complaints watching them.

Another problem is that it doesn’t appear the Roku will have any option to get newer content to the device even if you are willing to pay extra for it. This is a misstep. Netflix could make this device a killer if it simply would allow customers to pay a rate comparable to what Apple charges for new release movie rentals.

The device also has no hard drive, meaning that all content is streamed live over the Internet. If there is a hiccup in your connection — or if your connection is simply slow, this will obviously be a problem.

While CNET deems the picture quality “acceptable”, some will likely still pay to have the HD experience that other device including the Apple TV and Microsoft’s Xbox 360 offer. However, Wired reports that HD streams will show up eventually on the Roku device.

In another blow to Apple, the Roku device is said to be a snap to set up and work with (usually one of Apple’s strengths over competitors). You can even queue up movies from your computer to watch on your box. The simple remote that consists of only a few buttons even bares a resemblance to the Apple TV’s remote.

While everyone has known that Netflix had several set-top box partnerships in the works, one emerging this quickly is a surprise. Netflix and LG are said to also be teaming up on a box due later this year. Unnamed partnerships are also in the works for Netflix, the hottest of those rumors is that the service could team up with Microsoft to deliver Watch Now movies to the Xbox 360. As I’ve said before, this could be a true killer app. Netflix chief executive and founder Reed Hastings is on Microsoft’s board after all.

Roku is also a major threat to Vudu, another streaming-to-television video device which retails for around $300. Vudu is rumored to have raised $40 million in funding last month.

Also, remember that company that used to have a name synonymous with movie rentals? Blockbuster? Yeah, whatever happened to them? They may want to push a Movielink (the movie downloading service it bought last year) out the door sooner rather than later.

Apple will need to move fast to counter this offering. Perhaps another Apple TV price cut and a lot of talk about streaming new releases (which Netflix won’t have) to your TV could be the strategy short-term. An option of renting-to-own a movie might be nice as well to differentiate the service.

Long-term, perhaps a merged Apple TV/Mac Mini that I alluded to in an earlier post could work or maybe we could see some kind of subscription-based service from Apple? We already know it is talking about it with the record labels.

I said last month that the race for the living room was on. Netflix may have just found its Big Brown.