Social news site Propeller (formerly known as Netscape) has relaunched today with not only an entirely new look and feel, but a new method for determining the buzz-worthiness of news. Gone is the straight-up voting style that main rival Digg made popular, in its place is a rating-scale more akin to Yahoo Buzz.

The new system rates stories on a scale of 1 to 10 (basically their “buzz”). It appears that taken into account is the number of “Props” it has (votes), the number of comments it has and how many times it was actually read (I assume click-throughs to the actual article). 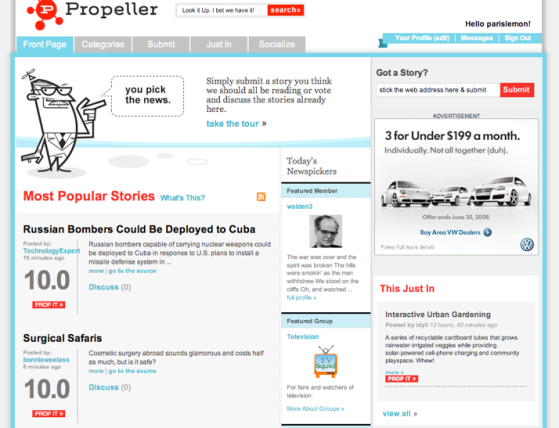 It also seems to be a smart idea to give weight to stories that are actually read. Digg may or may not do this with its algorithm, but from the comments on Digg it would seem that quite a few users never read the stories they are voting on at all.

Propeller took its new name in September 2007, giving netscape.com back to those who wanted to use it as a more traditional homepage. As you can see from the charts below, the Netscape domain almost immediately took a huge plunge while Propeller. Now the two are almost neck and neck in terms of traffic, according to Compete.

Unfortunately, much of the new Propeller site is either extremely buggy or completely broken right now. But we’ll give them a break, it is their first day.