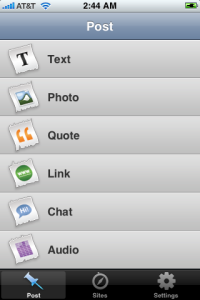 Tumblr has risen in popularity among the blogging platforms because of its simplicity. With a few clicks you can easily post various types of media without having to worry about code or formatting. In many ways, simplicity is also the key to the iPhone and Apple’s way of doing things, so it makes sense that Tumblr would make an iPhone app — and now it has (or at least has bought one — more on that below).

If you already have a Tumblr account, the interface of Tumblr’s iPhone app will be very familiar to you. A main posting screen gives you the option to post text, a photo, a quote, a link, a chat or audio. Those should be self-explanatory, but the photo and audio options are a bit different than normal because the iPhone has a camera and microphone built-in to use for each of those respective options.

As with many other iPhone apps, you can choose to take a new photo with the camera or select one that you already have saved to use for posting a photo. For the audio posts, you can record yourself talking into the iPhone’s microphone and post it right to your Tumblr site.

You can also use the app to post to different Tumblr blogs if you maintain multiple ones. The “Open Advanced Options” area contains a way to select the site you wish to post it to as well as options to make posts private, change their dates and tag them.

The “Sites” area of the app shows you the Tumblr Dashboard, a river that contains the posts from all the other Tumblr users that you follow. In the settings, you can choose to make this Dashboard page the main startup page for the app, as well as choose if the area should be formatted for the iPhone or displayed in its normal HTML state (it looks nicer if you choose the iPhone version). This Sites area also lets you see each of the Tumblr blogs you maintain as well as visit other Tumblr blogs (it’s basically a web browser).

While using something like the WordPress iPhone app can be daunting even for a seasoned blogger like yours truly, the Tumblr app provides a much easier way to post on the go. The app also features the ability to save drafts of posts in case you start something but want to finish it later. And it features auto-saving in case you receive a call while writing a post.

There have been quite a few third-party Tumblr iPhone apps before this launch, and Tumblr even promotes one of them, Tumblrette, on a key part of its site. In fact, Tumblr (which is the name of Tumblr’s iPhone app) looks almost identical to Tumblrette, with a very similar UI and feature set — even its icon looks exactly the same. It looks as if Tumblr struck a deal with Tumblrette’s developer to rebrand the app, tweak it a bit and make it free. Tumblrette is still available in the App Store for $1.99, but perhaps that will change shortly. [Update below.]

Original or not, the Tumblr iPhone app sticks to the basics of Tumblr, keeping it simple and fast, like it should be. It makes mobile blogging a breeze. It’s available now for free in the App Store.

The New York-based Tumblr recently raised a $4.5 million second round of funding led by Union Square Ventures and Spark Capital. Previously, the company had raised $750,000.

Update: Tumblr president John Maloney has confirmed to me that Tumblr has in fact bought Tumblrette. He went on to say, “There was a delay in transitioning the old app with the new one in the App Store, hence the brief confusion.” 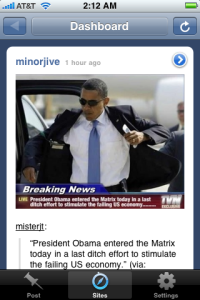 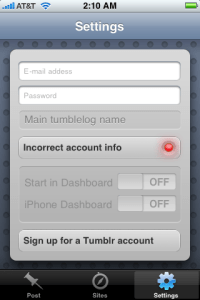 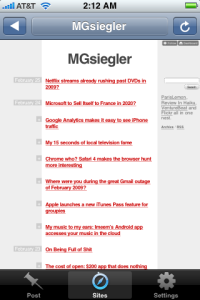 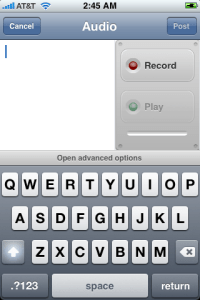