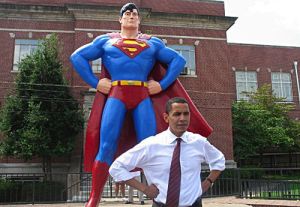 With families no longer huddling around the radio, the presidential “Fireside chats” of the ’30s and ’40s are moving to YouTube. Today, President-elect Barack Obama will be recording his weekly Democratic address not just on radio, but on video for the first time. The video will be uploaded to YouTube and available for viewing after the radio address is released on Saturday. Recorded in Chicago at the transition team’s office, the YouTube video will be posted to Obama’s site Change.gov, which is supposed to make his administration more transparent.

Obama will continue to record these videos and post them weekly, with the goal being to make the White House and the political process more transparent and to give government a public face. They are to be followed by video interviews of policy experts and senior transition team members, online Q&As and perhaps some aww-inducing footage of the Obama family’s future puppy. It has been reported that the administration will even launch a White House YouTube channel soon after taking office.

But will these videos really make an Obama White House more transparent? The video will be more visually appealing, user-friendly and accessible than a radio address (can you remember the last time you turned on the radio for an important announcement?) and much more widely distributed, but it’s still a controlled, one-way message. Let’s hope Obama starts using Change.gov to enable real dialogue and interaction soon.

Regardless, Obama’s innovative campaign and approach to multimedia has set the tone for increased online interaction between the White House and the public, as compelling videos like this one have certainly rallied more supporters, sparked conversations and fostered communities.