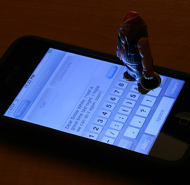 While everyone throws a fit over Apple and AT&T’s tricky pricing for the iPhone 3G, the real travesty in pricing is slipping by largely unnoticed: AT&T is including no text messages in its iPhone 3G monthly plans.

This means that on top of your cellular plan, and on top of your new 3G data plan, you will need to purchase a text messaging plan. This is a rip-off of epic proportions.

Lets think about this for a minute. What is a text message? It’s a relatively tiny amount of data (160 characters or fewer) that is sent using the short messaging service (SMS). With the iPhone’s unlimited data plan, which includes everything but texting, you’re probably sending hundreds of megabytes, and soon gigabytes, of data each month for $20-$30. Yet to send 200 of these 160-character text messages, it will likely be $5 to $10 extra a month.

A text message is data, and a very small amount of it. So why am I paying so much extra — let alone anything extra for it?

This seems like it would be a perfect candidate for one of those “Fleecing of America” segments that run on the NBC Nightly News — except that it’s arguably worse in the rest the world. Of the 2.3 trillion text messages are expected to be sent this year, the United States represents a relatively small percentage with “only” 300 billion sent. Not surprisingly, China is the largest market for the messages, with well over 500 billion sent. Mobile companies are making billions of dollars off of these messages.

Even worse is that carriers effectively double charge for each message. They charge both the sender and recipient of each one. In the United States these messages usually cost around 10 cents per message but can go as high as 25 cents a message without a pre-paid plan.

If you’re anything like me, you’re going to use many more than just 200 messages included in a bare-bones plan. Like many first generation iPhone owners, I signed up with the default 200 messages that were included in the original plans. One month I overshot this by 350 messages, and I would hardly consider myself a heavy text messenger. 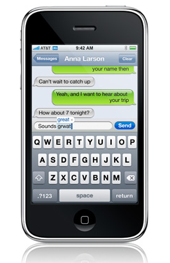 But the iPhone seems to do that. Just as it has spurred use of the Internet on mobile phones, the iPhone has made text messaging very appealing to me. One reason is that I actually have a keyboard now instead of using that bogus T9 typing mechanism all of my previous phones had. And the other is that Apple makes text messaging look just like its iChat application, with conversations threaded just like an IM.

I use text messaging on the iPhone now just like I use IM. This is a major problem when I only have 200 messages I can send or receive — and each one after that is 10 cents a message. I upgraded my plan to 1500 messages, but under this new iPhone 3G payment structure, this is likely to add around $20 to my monthly bill. Everyone is all up in arms over the $10 raise for 3G data plan, what about the extra $20 many of us are going to have to pay?

Perhaps one of the companies building applications will come up with a way to circumvent this ridiculous charge for text messages. During Apple’s SDK road map event, AOL was unveiled as partner to bring its AOL Instant Messenger program to the iPhone, but we didn’t hear anything about it at WWDC. Hopefully that is still in the cards, because it could be exactly what I’m looking for — assuming that Apple’s new Push Notification Service works as well as advertised.

Instant messaging on phones with unlimited data plans such as the iPhone could easily kill text messaging. And it should, because I don’t want to keep paying for unlimited data only to have it be limited to certain kinds of data.

Text messaging almost makes the mobile industry’s other scam, the ringtone, look like a deal. And it makes that $10 a month extra on your iPhone bill for 3G data look like a steal.