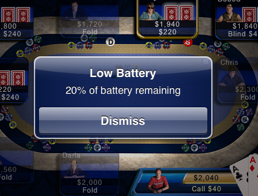 The mid-day charge. It’s a term that iPhone 3G owners are getting to know all too well. You unplug the device in the morning then set out on your day, only to find that sometime in the afternoon you need to recharge the battery again. Many complain about this annoyance and wonder why Apple made a device with such a limitation.

But let’s be honest. The real reason that the iPhone 3G’s battery drains so quickly is that you’re using the iPhone 3G much more than any other phone. And doing complex things on it.

One of those things is browsing the web. It’s not just browsing a text-based mobile version of the web, on the iPhone you get the full-on graphical front and can run web apps that use JavaScript. The device’s web browsing share has doubled in the past few months since the launch of the iPhone 3G, according to new data by analytics company Net Applications.

The data shows that it went from an already high 0.15 percent in April 2008 to .30 percent in August. In the past month alone it’s risen 58 percent. Look at the chart below, growth is exploding. The iPhone is about to pass Windows 98 and is about one third of the way to Linux’s web browsing market share. That’s pretty incredible. 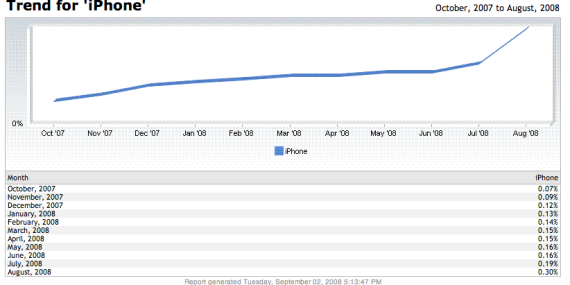 The other thing that has people using the iPhone so much are the applications. With the launch of the App Store, Apple and third party developers have bombarded us with already well over 1,000 apps to use of the device. Many of these are more battery-intensive including games and apps that use the phone’s location capabilities — again, sucking up battery life.

Already, over 60 million apps have been downloaded via the App Store. That’s 60 million new things to do on a device that already was a phone and a web browsing machine. Oh yeah, and an iPod. I probably use my iPhone to listen to music more than anything else.

Sure, my Motorola RAZR had better battery life then the iPhone 3G, but I basically only used it to make calls and occasionally send a text message. I would use it maybe four or five times a day, most of the time for just a few minutes, and as such, the device would last the whole day.

You could use the Internet on it, but it was a joke. The screen was so small and the connection so slow.

Despite some varying results, the iPhone’s new 3G chip makes browsing the Internet and using apps faster and so people tend to use them more. When asked by Apple didn’t include a 3G chip in the first iteration of the iPhone, Apple chief executive Steve Jobs had the following to say at an event in London last year:

“The 3G chipsets that are available to semiconductors work reasonably well except for power. They are real power hogs. So as you know, the handset battery life used to be 5-6 hours for GSM, but when we got to 3G they got cut in half. Most 3G phones have battery lives of 2-3 hours.”

Some suggested Jobs was being disingenuous with that statement and simply made a mistake in not including a 3G chip in the original iPhone. Now, some of those same people are complaining about the iPhone 3G’s battery life. Even though tests have shown that its battery life is actually better than almost all comparable 3G devices.

The iPhone has turned notion of how we use mobile phones on its head. It’s no longer just a device for making calls. It’s a PDA, a gaming machine, a location device, a music player, a movie player, a camera, and Internet browser and a phone.

Its battery “sucks” because we’re sucking its battery dry.