Last week, a blogger named Josh Chandler sent the tech blogosphere into full-scale buzz mode with the rumor that Twitter had acquired the Twitter search engine, Summize. Turns out the rumor is true and that the 5-man strong Summize team has walked into approximately $15 million of cash and Twitter stock, Silicon Alley Insider reports.

The Virginia-based Summize team will now move to San Francisco to work with Twitter. GigaOM’s Om Malik confirmed the deal last week, although all the details were not known at the time.

The two companies teamed up for Apple’s WWDC conference in June, and when Twitter had shut down its “replies” function last month, savvy Twitterers turned to Summize, instead.

Many, including VentureBeat’s MG Siegler, had been advocating for Twitter to buy Summize for some time. Towards the end of June, Siegler wrote:

You’ve got the money now Twitter, why not just buy it [Summize] and turn it into search.twitter.com?

And that is exactly what Twitter has done. The Summize search engine has been reskinned and renamed Twitter Search.

Twitter plans to further implement the Summize search features into the main site going forward and even sketched out a little design of what this might look like (below). 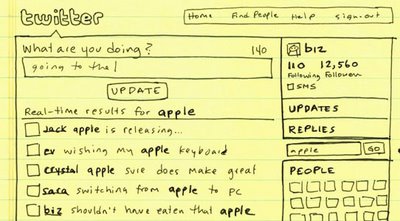