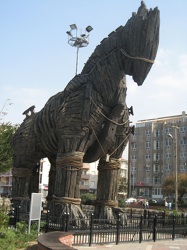 If you’re a subscriber to the DVD rental-by-mail service Netflix, you probably want to get your hands on the new Roku box. This device lets you stream any of Netflix’s 10,000+ “Watch Now” movies (movies that can be watched immediately over the internet for free with your subscription) to your TV set instantly. Quantities of the device are already scarce.

A new tidbit may make the device even more attractive: With a simple software download, other services beyond Netflix will soon be able to use it, according to Forbes.

This changes the device from a nice little purchase (it’s only $99), into a potential Trojan horse for digital content in your living room. Of course, it entirely depends on what other services reach agreements to use the device. Roku would only say that other “big name” providers could bring their services to the device with a simple update.

If it’s a movie download service such as Amazon’s Unbox (which currently has a deal with TiVo to get into the living room), that could be big. It would bring recent releases along with the vast array of Netflix’s catalog films to one device.

Of course while Roku isn’t exclusively Netflix, Netflix isn’t exclusively Roku either. The company plans to release another box featuring its “Watch Now” service in conjunction with LG later this year. There’s also an intriguing rumor that the service could come to Microsoft’s Xbox 360 gaming console.