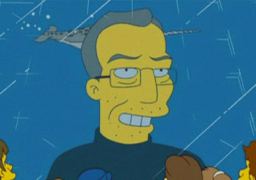 I haven’t watched The Simpsons in ages. I guess I just find it hard to relate to a show that I found funny when I was eight years old. But I was shocked to learn that in its 20 seasons, the show hadn’t really mocked Apple before — until last night.

In an episode titled, “Mypods and Boomsticks,” the Simpson family travels to the new “Mapple” store in Springfield. It’s filled with “myPods,” “myPhones” and a “Brainiac Bar.” Lisa Simpson is sad because she can’t afford any of the products, so she tries to buy some “myPhonies,” fake earbuds so people thinks she has a myPod.

A lot of it is funny, but just as much of it is stale. Homer Simpson is admiring the “myCube” at one point. This is meant to mock the Power Mac G4 Cube — the problem is that product was made from 2000 to 2001. A lot of today’s Apple fans (and Apple haters) probably have no idea what that is because it pre-dates even the first iPod, which kicked off the trend of Apple being cool in the mainstream.

“Steve Mobs” greets the store visitors at one point on a giant screen in a clear send-up of Apple’s famous “1984” Macintosh commercial in which “Big Brother” addresses an audience. It’s funny when Mobs says he has an announcement that will “completely change the way you look at everything” and the crowd all immediately pull money out of their wallets. But when Bart Simpson takes control of the microphone and says that Steve Mobs has made a fortune taking money from Mapple buyers and investing it in Microsoft, he doesn’t point out that since Apple’s explosion in popularity, Microsoft’s stock price has been largely flat.

Find two clips from the episode below [via Engadget] or watch the entire episode on Hulu.