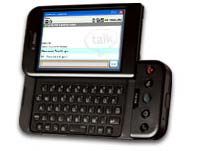 Just when I thought I had my fill of Android related stories for today, I found a couple things of note to reinvigorate my interest. Or at least my anger: Text messages and bandwidth caps.

After all is said and done (meaning after your two year contract is up), T-Mobile’s new G1 Google Android phone is about $380 cheaper than a roughly comparable iPhone 3G, Wired nicely lays out. The reason? The absolutely ludicrous price AT&T charges for text messages.

Regular readers will know my hatred for the cost of text messaging. It’s a tiny bit of data, yet companies like AT&T get away with charging customers $5 a month for 200 text messages, $15 a month for 1500 or $20 a month for unlimited. Mind you, this is on top of the $30 you’re already spending for supposedly unlimited data.

Basically, you’re saving $15 a month on unlimited texts through T-Mobile. After two years this works out to — get this — $360. Almost the exact same amount that the G1 beats the iPhone 3G in price.

But T-Mobile has its own problems as well. Hidden within the fine print of your unlimited data agreement is the ridiculous clause that says all bandwidth used after the first gigabyte of data is transfered will be limited to 50 Kbps (Kilobits per second) or less, according to dslreports.com. Google and T-Mobile spokespeople apparently denied the limitations, according to GigaOM. But sure enough, it’s right there on the G1 website for T-Mobile. (See the screenshot at the bottom.)

Even though the carriers in the U.S. are evolving thanks to pressure from the likes of Apple (with the iPhone) and now Google (with Android), it appears they’re still trying to nickel and dime us.