Move over, C-SPAN. The 111th Congress opens today with a virtual bang — YouTube is launching channels for The Senate and the House of Representatives to make it easier for average viewers to connect with their Senators and Representatives (we know you’ve been procrastinating on your letter writing campaigns). An explanation of the new service (delivered with obvious help from a teleprompter) can be seen here:

The YouTube channels are well-designed, with an interactive map that you can click on to find your state’s congressional leaders and their personal YouTube channels (funnily enough, the Senate and the House are both 31-years-old, according to their YouTube channel pages). 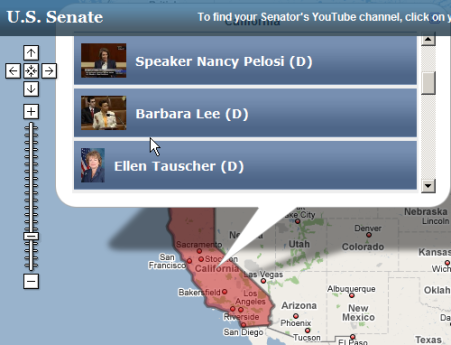 Floor speeches and committee hearings as well as “behind-the-scenes footage from Capitol Hill” will be available. Elected officials are posting videos directly from their Washington offices as well, but the majority of current videos available have garnered very few views — most likely because they feel more like commercials for government than sincere attempts to reach out to constituents. Hopefully the introduction of this technology will encourage them to speak more clearly, or at least try to cater to viewers just a bit more. Speaking of elected officials using technology, we found a video of Ohio Congressman Tim Ryan showing off his Facebook skills:

As the YouTube blog says, “They’re posting videos direct from their Washington offices, as well as clips of floor speeches and committee hearings alongside additional behind-the-scenes footage from Capitol Hill.”

The Congressional move to YouTube is an attempt to engage citizens, following in Barack Obama’s footsteps in his commitment to transparency and online video with his weekly YouTube addresses.

While the YouTube blog says that these channels are the equivalent of a “backstage pass” to the government, efforts to make the Congressional activity more transparent will be effective only if the communication goes both ways. Quite a few of the congressional leaders’ YouTube channels have disabled comments — understandable due to the potential for idiotic YouTube comments like “TAXES R LAME, LOL” — but if YouTube is to be a platform for citizens to speak up and provide feedback, users need to be able to do so directly on the site.