A billion dollars in revenue in a single year? Not even MySpace, currently the most profitable social network outside China, has managed to accomplish that. But publicly traded Tencent, a leading Chinese web portal, instant message client, social network, game developer and more has done it, and largely through the use of virtual goods and other “Internet valued-added services,” like avatars, dating services, online memberships, music and community sites.

Overall, the so-called IVAS revenue category contributed to 70.5 percent or $719.1 million, a 95.5 increase over 2007; mobile and telecom services contributed $204.7 million and online advertising contributed $120.9 million. This stands in contrast to American social networks. MySpace brought in around $800 million last year, coming in at less than the hoped-for $1 billion goal set during a healthier display-advertising market. Facebook brought in $250 to $300 million (it’s not focused on monetization, it says). Both of those companies have minimal virtual goods services but continue to get most of their money from various forms of online advertising.

Tencent expects online advertising to suffer the most, said company chairman and chief executive Ma Huateng. From the company’s statement on these numbers (which are unaudited):

Our online advertising business will experience particular pressure as advertisers reduce or delay their advertising budget, while our user-paid small ticket based entertainment and membership services will be relatively more resilient.

Tencent recently claimed that its social network, Qzone, is the world’s largest, with more than 200 million monthly active users in January. Facebook is somewhere right around the same number, and growing at 5 million users a week — but spread out over the world. MySpace, meanwhile, has said it has around 140 million users, with over half in the U.S. Historically, the U.S. has had the most lucrative online advertising market.

Facebook has offered virtual gifts, including branded ads. In my conversations with the company, it has said that it blends that revenue in with other ad categories, so it’s not clear how much it’s making for similar services.

Tencent isn’t quite analogous to the traditional social network, either, as it’s a conglomerate of consumer-facing web services. The point is that its revenue model is built into how people use the site. The IVAS category breakdown isn’t clear, but the avatar service QQShow is a good example of how the company is making money. In it, “QQ users can choose virtual clothing, jewelry, backgrounds and cosmetics to customize the avatar they use in services, such as QQ IM, QQ Chat Room, Tencent Community and QQLove. 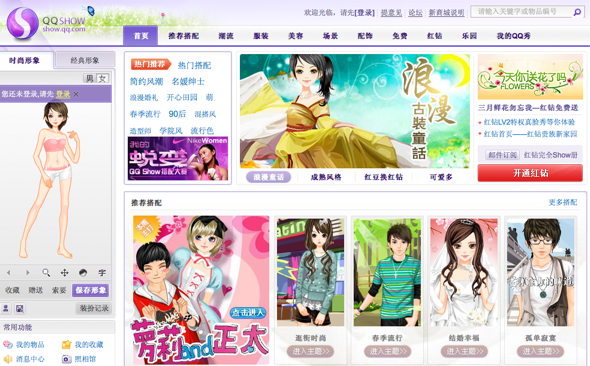 The company is seemingly focused on making money from everything but display advertising. Via the report today (which you can find out about on Web2Asia):

Besides the growth in revenues from online games, revenues from QQ Membership registered growth due to increased user loyalty and stickiness as the service was enhanced with differentiated value-added functions and privileges across our platforms.

The virtual goods business model category has been getting a great deal more attention in the U.S. and other countries recently — seemingly as Tencent’s story has begun getting out. Perhaps Chinese users like virtual goods more than people in other places? It seems too early to tell. Facebook and MySpace’s own efforts are young. Another large social network, hi5, has refocused its revenue model mainly towards virtual goods and is hoping to make $25 million this coming year from gaming items and other goods spread across its user base of 60 million in a number of countries around the world. Of course, a wide range of third-party developers for applications on Facebook, MySpace and other sites have reported positive numbers. At this point there is not reliable data on the overall size of the market (let me know if you have any more on that, anyone).

The takeaway from Tencent’s numbers today is that the company is moving faster to make what appear to be more reliable revenue streams. MySpace is exploring music, mobile and other services for their money-making potential. Facebook is focused on experimenting with ads that appear in feeds of user activity. Those could one day prove to be more profitable as well. Virtual goods revenue is one of many ways that social networks could prove the value of their traffic — but at this point, it has the most results to show for itself.