People who party a lot know the dark, sad hours before the dawn, when you’re exhausted, home is a long way away, and there are no trains running.

So do the entrepreneurs behind Skout and Nixter, but in a very different way.

And now they’re combining to help people find better parties to go to.

Skout, a social network that millions of young adults use to meet new people, has acquired Nixter, a small startup with an app that helps people find nightclubs. Together, the two companies are launching a new site aimed at helping nightclub promoters sell tickets and manage their guest lists.

Skout has been profitable for the past six months and is adding 1.5 million new users each month, according to cofounder and chief executive Christian Wiklund, who met with me last week, along with Nixter cofounder and “chief nightlife officer” Francisco Sáez, to break the news about the acquisition.

Most people using Skout are young urban dwellers looking for something to do and someone to do it with. In 2013, Skout facilitated 500 million new connections worldwide, Wiklund said. (He defines a new connection as two new people connecting with each other and then exchanging six or more messages.) Half of those connections were local (between people in the same city), and half global, across larger distances.

Their most common status update, according to Wiklund: “I’m bored.”

So what do you do with millions of urban users whose main complaint is that they are bored? Give them some nightlife options.

But Skout’s team ran into a problem.

“We quickly realized that we are software guys — we know how to throw a barbecue and mix margaritas,” said Wiklund, who has two young children and a third on the way. What Skout’s team lacked was a real understanding of what nightlife is. 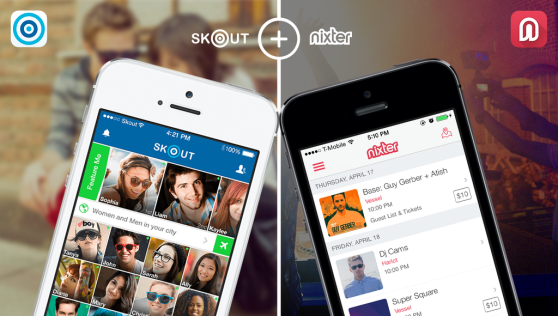 Enter the young guys behind Nixter. A small startup from Santiago, Chile, Nixter was founded in 2008 by two pairs of brothers who were working as nightclub promoters while avoiding studying for their classes. The brothers (Francisco and Joaquin Sáez and Vincente and Francisco Yarad) started by offering a “club card” for nightclubs — a loyalty card that gave cardholders VIP access — and decided there was a lot of value in the data they were collecting.

After coding software, going through several pivots, and spending three months of 2012 at the Plug & Play Tech Center in Sunnyvale, Calif., they had a working party-recommendation app but no traction and no money.

“We were very close to just ending everything and going back to studying,” Francisco Sáez said.

Then they had an insight.

“We realized after all the versions of the app we did in 2012, people would just open the app, click on a nightclub, click on an event, and click ‘Join’ to let their friends know they were going,” Sáez said. “So we decided to make that the only feature.”

Nixter relaunched its app in mid-2013 with the slogan “you’re just one swipe away from the best night of your life.”

Now, Nixter — as part of Skout — is launching NightLifeGraph.com, which is aimed at helping nightclub owners and promoters manage their guest lists and sell tickets. For the nightclubs, it offers ticketing, e-commerce (so people can buy the tickets online), guest list management, analytics, and affiliate tracking (for handling co-promoters, who get a cut of the tickets they sell). The service is free for nightclubs and makes money by charging consumers: For instance, it tacks a $1.54 surcharge onto a $10 ticket.

Location-based advertising could be another lucrative source of revenue, because it will have very accurate data on what people are actually doing at that moment. When you are checked in to a nightclub, it’s certain you are in that location and ready to party — a prime time to show you an ad for a brand of alcohol, tout the club’s bottle service, or maybe offer a discount on an Uber ride home.

Also, those millions of worldwide users represent an enormous potential market for nightclub promoters who want to fill their clubs.

“We can leverage the user base from Skout to do things we couldn’t do before,” Sáez said. For instance, there are 100,000 active users of Skout in Hong Kong between the ages of 22 and 35, and Skout can target all of them through NightLifeGraph. That alone should make it attractive to nightclubs, which typically are willing to pay promoters $3 to $8 per head to get people in the door, Wiklund said.

As Wiklund put it, “cool parties in your city” is a premium form of content, and one that’s highly monetizable.

Eventually, Wiklund said, the company could use the NightLifeGraph technology to target other markets, selling tickets and managing guest lists for sporting events, bars, Napa Valley wine tours, maybe even conferences. That would put it in more direct competition with general-purpose ticketing companies like Eventbrite.

But, said Wiklund, “We really want to nail this first.”

“We’re focused on collecting data and things that can bring much more than the transaction fee,” Sáez said. The company can do that only by retaining a very vertical focus, enabling it to target the specific needs of a specific market in a way that a general-purpose ticketing service can’t do, he added.

The team is certainly going to face a lot of competition. In addition to general-purpose services like Eventbrite, Ticketmaster, and Tickets.com, Sáez said there are about a thousand apps for managing events, and about 200 nightlife apps.

Not just a hookup app

It’s not a hookup app or a flirting app, Wiklund insisted. There’s no algorithm for matching people, like you’d find on OKCupid or Tinder. Instead, it’s mostly for people looking for parties, concerts, and new places to go. It’s a “social entertainment tool,” Wiklund said.

“Look at it as a social venue where you have randomness,” like a party, Wiklund said.

Nevertheless, people have certainly used Skout to hook up. And the company ran into trouble about two years ago when it discovered that sexual predators were using the network to target teens, which had led to three separate rape cases. The company shut down its teen community completely for one month, then brought it back online with some significant restrictions: Teens using the service can’t connect with anyone less than 100 miles away. That makes it far less risky for kids to use, since it effectively turns Skout into a “pen pal app.”

(To prevent adults stalking other adults, grown-up users can see location data but not anything more precise than a one-mile radius.)

The company also employs 60 moderators, providing 24/7 coverage to ensure no shenanigans. That’s a pretty significant number of moderators considering Skout employs 150 people altogether. It’s also got a privacy and safety board comprised of people outside the company who help hold it accountable.

Bad stuff happens in any community, Wiklund acknowledges, and Skout isn’t going to be perfect. But, he said, “We want to be the safest community.”

Now the company is profitable, Wiklund revealed for the first time, and has been for the past six months.

Revenue is split approximately equally between in-app purchases (which let you buy virtual gifts for your friends, unlock the ability to see who has viewed your profile, or promote yourself) and advertising. The company’s ad business includes location-targeted display ads as well as video. Skout is also a big purchaser of mobile ads.

Skout and Nixter started talking in September, 2013 and completed the transaction in January of this year. When they closed the deal, Sáez said, the Nixter team had barely-working laptops and just $400 in their bank account.

In that, they have something in common with their new corporate owner.

Skout is based in San Francisco and has raised $22 million from a single investor, Andreessen Horowitz, not counting a seed round of indeterminate size and origin.

But before the funding, which came in April, 2012, Wiklund said the Skout came close to bankruptcy four times. He had many moments when he was on the verge of losing faith and wasn’t sure he could even go on.

“Everyone building a company has those moments. It’s just a question of how you handle it and how frequent they are,” Wiklund said.