People searching for the name of the alleged shooter via a legitimate news report were just as likely to stumble across deliberate misinformation as pro-gun bots swung into action: 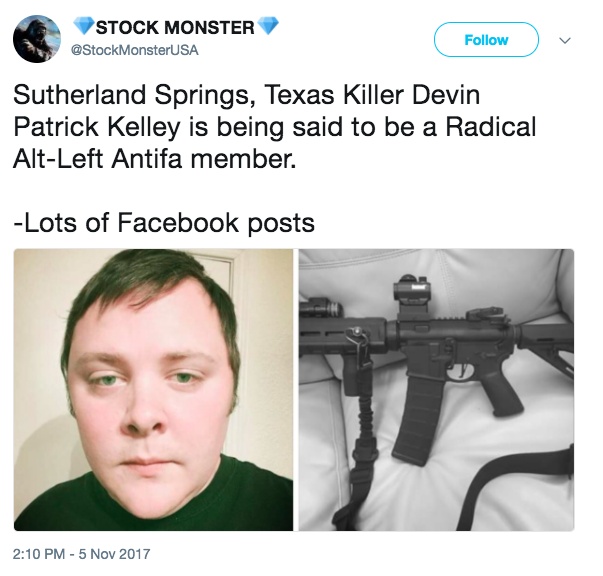 Of course, not all of these posters were bots:

This is circulating on FB. Seems that Devin Patrick Kelley might be a member of ANTIFA and hates fellow whites.#TexasShooter pic.twitter.com/TtnrX3YqvN

More than 11 years after Twitter came into existence, the situation feels hopeless. We have gone around the same circle too many times. The same Antifa propaganda was being spread almost immediately after the Las Vegas Massacre. The company claims it is cracking down on fake news and bots and adding transparency and blah blah blah, but nothing changes.

The cynics among us would like to argue that Twitter intentionally turns a blind eye to such things because they are critical to driving users and ad dollars. But maybe it’s worse than that. Maybe the problem is that these issues are so deeply rooted into the very nature of the Twitter platform that nothing can be done about them.

If that is the case, it seems time to have a discussion about whether Twitter has become so dangerous and toxic that we should move to shut it down. What exactly is the value to the public good of something that facilitates harassment? Makes people dumber? Stokes hate and anger? Becomes a weapon to subvert democracy?

Clearly, shutting down Twitter isn’t something the government could do. It would also be a longer-than-longshot for a private citizen to conduct a hostile takeover and pay north of $20 billion to buy and close the company.

No, this would likely need to be a combination of investors punishing the company by abandoning the stock and advertisers refusing to have their brand associated with Twitter. Again, both longshots. It would require massive pressure from users, or former users, because neither investors nor advertisers are going to willingly walk away from something that they think can make them money.

Still, the ongoing missteps, pratfalls, and revelations are creating a solid foundation upon which to question the worth of Twitter’s very existence.

This latest episode comes after a week that was even more embarrassing than usual for Twitter. There was that miscue about shutting down President Trump’s account for 11 minutes, because it turns out access to such tools was a bit too loose. My colleague Emil Protalinski took Twitter to task for this last week:

How in the hell can one person do so much damage in so little time? This is a public company we’re talking about, not the White House. It’s frankly insane that a Twitter customer support employee can ban an account so easily. Unlike the U.S. government, Twitter apparently doesn’t have many checks and balances in place.

Twitter also updated its user guidelines for what seems like the 100th time this year to try again to make it clear what kind of behavior will get someone banned. But the problem is not just the policy, it’s the application of it. Take this example. The company has apparently banned right-wing conspiracy theorist Roger Stone following a fusillade of profanity and threats.

But conservatives asked a legitimate question:

I’m more sympathetic to Olberman than Stone politically, but the point is fair. Why ban one and not the other? It’s not that Twitter lacks rules. Rather, it often seems they are arbitrarily applied, making them incomprehensible. The company pledges more transparency and rewrites its terms of service, but it never seems to be able to sufficiently explain itself, leaving all sides feeling alienated and suspicious.

All this came as Twitter joined other tech companies testifying before Congress to explain how they were abused by Russian propagandists during the U.S. election last year. One Senator noted that Twitter “seems to be vastly underestimating the number of fake accounts and bots pushing disinformation.” Twitter admitted to finding 2,700 accounts with Russian ties after saying a month earlier that it had only found 200. And then there were tweets offering fake vote-by-text instructions. No one seemed to believe that only 5 percent of the accounts on the system were bots. The arguments about the need to allow anonymity on Twitter appeared to be wearing thin.

In the middle of all this, Twitter made a splash by announcing that it had banned the Russia-based Russia Today from buying ads to promote its content. This move seemed laudable but was then undercut by RT officials who released a pitchdeck Twitter had previously sent soliciting their business.

Could the week get worse? Why, yes it can!

Over the weekend, Saudi Arabia arrested Prince Al-Waleed bin Talal and charged him with money laundering amid a massive government crackdown on political rivals. The prince had invested $300 million into Twitter back in 2011, making him the second largest shareholder after CEO Jack Dorsey.

Oh, and just to add to the fun: An ongoing series of document leaks known as the Paradise Papers confirmed that a Kremlin-backed bank was the source of much of the money Russian investor Yuri Milner pumped into companies like Twitter. These were the funds that gave him a 5 percent stake in Twitter at one point, bringing that whole Russian thing full circle.

Just to be clear, many of these issues touch Facebook as well, along with some other Silicon Valley companies. But I’ll save that for another rant. Because Facebook still remains a distant second when it comes to the ineptitude shown by Twitter in its handling of this dizzying array of dysfunctions.

So far, Twitter has managed to avoid a major reckoning. It faces a social media and PR backlash. Then the world moves on. Then Trump tweets or someone gets harassed, people get angry, repeat.

At some point, this has to stop. At some point, people have to say “enough.” At some point, we have to ask whether the value of a service that lets us share cat GIFs and restaurant photos outweighs its poisoning of our politics and culture and civil society itself.

The question we need to ask now is: Has Twitter at long last reach that point?