I sat down at the noisy THQ Gamer Day party to speak with Bob Aniello, the senior vice president of worldwide marketing at the Calabasas, Calif.-based video game company. THQ has become a powerhouse over the past decade as it expanded into a variety of new markets, from casual games on consoles to mobile phone games. Its titles include games based on Pixar’s animated movies such as “Cars” and “Ratatouille,” as well as hardcore games such as “Company of Heroes” and the upcoming “Darksiders,” pictured here.

Aniello has some choice words about all of the casual game start-ups being funded, Hollywood studios moving into games, and his bigger competition, Electronic Arts and Activision Blizzard.

Q: I’m seeing so many casual games start-ups coming out of stealth. There are two or three a week. They’ve been funded by angels. Why is this happening?A few years ago, there were 100 mobile companies. Does it make sense to you? 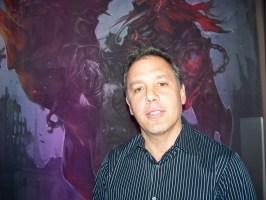 A: We are very active in the casual games area and have a casual games group. Whether you are talking about the Nintendo Wii, the Nintendo DS, or casual games on the online PC, we’re seeing it explode. When you say the word “casual,” it can mean a lot of different things. We see a broadening of the gamer base. More females. They are up to 20 percent of the total gaming population. Going back a long way, that was something we always dreamed about (Editor note: yeah, remember how guy gamers couldn’t get dates?). Kids are gaming at younger ages. That’s opening a lot of opportunity in casual games. How many should there be? It should probably end up like mobile. There will be consolidation. There will be companies that are aggregators and those that create content.

De Blob (pictured, for the Nintendo Wii) and Construction Combat: Lock’s Quest (for the Nintendo DS) for us came from small indie development. We pay a lot of attention to the indie community. When we see something good, we grab it and blow it out across a lot of platforms. So we have to partner with those who make the great games.

Q: These casual start-ups are more like social networking sites, with games added. They would fit better with Facebook than with console game companies.

A: We’re seeing an explosion of community on console too. The whole community aspect is not limited to online, though online PCs have better functionality now than console online games.

WWE (pictured) is a fantastic example of community build around our games. What has been absent for a long time is that communities are now forming around games. Like Guitar Hero. We see that trend as platform agnostic.

Q: There are a lot of companies doing Facebook games. Is that attractive to you? Electronic Arts’ executives had a lot of slides with Facebook logos on them. It suggests there is value in getting their brand in front of Facebook users or getting them to play games on Facebook.

A: Facebook is a multiplicity of communities. We partnered with Oberon, which is doing light games on Facebook. We are making (retail) games of the Oberon titles that appear on Facebook. We are attacking that opportunity in a much more traditional way. It’s really about being platform agnostic.

Q: Do you think the social networks have stolen attention from games?

A: No, not at all. Social networks are building around games. If anything, games are expanding the use of social networks.

Q: What are your expansion areas?

A: We are platform agnostic. We are in mobile. We are in online games in Asia with “Company of Heroes.” We’ll be announcing more in the next 12 months. Asia represents a big opportunity for us because the installed base of online game users is bigger than it is here. Online, Asia, casual. Those are spots we’re investing in. From a content perspective, gaming has been about conquering, destruction and quest. Now we can focus on restoration, like with De Blob, (where you paint a darkened gray city with colorful blobs). Lock’s Quest (pictured) is also about restoration, not destruction. That’s an area that is emerging.

Q: What do you think of the latest Hollywood trend with studios moving into games?

A: I think it will end up the same way that it did the last time they got into the business. The skill set is so different from what Hollywood knows that it becomes a struggle for them. This proves another point. It really isn’t about scale. Big companies with big scale all eventually fail.

Q: What did you think about Electronic Arts moving to original games because gamers are bored with movie games and the Hollywood studios are doing games. EA is trying to turn its own original games into franchises and then make them into movies.

A: It’s not a new strategy. They’ve been saying that for at least 10 years, when I worked there. There was a balance between great movies that become games and games that become movies. There is room for both. Who can both execute? I believe the vertical integration of movie studios doing games will fail. Our experience with Pixar shows that a movie company working with a game company can consistently lead to better games. We can make, market and distribute games better than the movie companies.

Q: If the EA-Take-Two Interactive merger and Activision Blizzard merger go through , what will the gaming industry look like?

A: The issue is for the small independent developer. They are finding it harder and harder to break through with their ideas for games. Big companies focus on what is produced internally. The small developers need an advocate. At THQ, we balance that. We have great internal studios and we complement what they do with games produce externally, like “Baja.” (pictured) We work very well with external developers. They see THQ as a friend of developers. We’re one of the few that continues to focus on external development.

Q: Is creation and destruction the pattern among game developers?

A: That is the history of our industry. You build scale. Scale becomes destructive. Then the creative talent leaves. We have the right scale. We are not too large or too small. That gives us a managerial advantage. When you look at all publishers, not a single one has mastered open-world games.

Q: What are the highlights of your line-up?

A: I’m talking about our line-up: Saint’s Row 2, “Red Faction Guerilla,” and “Destroy All Humans: Path of the Furon.” Everything is destructible in Red Faction and it’s an open world. There is a social network in Saint’s Row 2. “Smackdown vs. Raw” is always a big seller for us and you can match up and do tag-team play. That’s never been done before. That’s an exciting game for us. De Blob is an exciting game with rich story, an action platformer, developed by an indie game developer.

Q: What works at this point in the game console cycle?

A: What works is great quality. That’s what’s selling. There is not a lot of tolerance for mediocre games now. Everyone is stepping up and that is why the industry growth rate is exceeding all forecasts.

Q: Do the economic difficulties make you wonder if the game industry sales will slow?

A: It comes down to simple value for money. You can go to a movie and pay $35 by the time you walk out. Or you can get a great game you play for hours and then go online and play even more. The games live longer online and that means value for money.

Q: Are you betting equally across the game platforms?

A: It depends on the region. The Xbox 360 is the early winner here in the U.S. We like the Wii but you can’t just port games to it. In Europe, PlayStation 3 is looking very promising and in Japan. That will be a strong platform for us.

Q: What new business models are you experimenting with?

A: Look at our “Company of Heroes” franchise. We have an online version with Shanda in Asia. In terms of the console online business, you will see rich, downloadable content announcements from us in the future. That will be in the wrestling game, Saint’s Row 2, and Red Faction Guerilla (pictured). Downloads will be big parts of those games.