We’re loving the new Facebook Timeline features for personal profiles, and those features (and a few more) are now launching for brand-focused Pages, too.

At Facebook’s headquarters Tuesday, we got a sneak peek of the new Pages, and the new designs amount to a lot more than just a facelift. These Pages are full of features that any social-media manager for an organization will love.

Yes, Pages are getting those big, glossy cover photos and full-width media highlights. But Page admins are also getting messaging capabilities (a first for businesses on Facebook), an all-new dashboard for analytics, and a friends-focused approach to growing an audience.

Timeline recently launched as a new way for people to curate and design their personal profiles, but as Facebook’s designers and developers see it, corporations and other organizations are people, too. 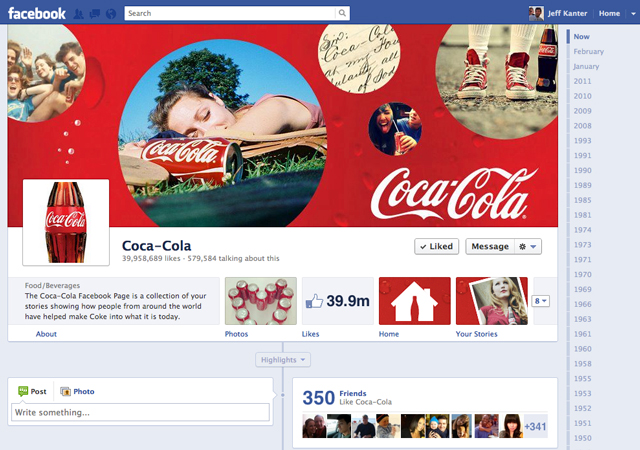 Looking through the eyes of friendship

Facebook design guru Sam Lessin, who captained the Timeline design, said in Tuesday’s show-and-tell session that Timeline “wasn’t ever meant to be just about people, just for humans. It’s a phase shift for the company overall and how we think about identity… We always start with people. We’re Facebook, that’s kind of what we do… and then we do it for other types of organizations that also have a story and want to be able to tell it.”

He continued to say that Facebook Pages will now embrace “the whole concept that organizations have identities, that a nonprofit, a sports team, all have identities that they want to express.”

Lessin said at the launch of Timeline that the new design’s distinctly emotional appeal was intentional, and yesterday, product director Gokul Rajaram reiterated that concept, but with a brand-focused bent.

“We’ve seen that most businesses have a core group of loyalists, but those loyalists also have friends,” he said. “We’ve made it easier for people to connect with a business through the lens of their friends… It’s a much more personalized experience.”

When you go to a Facebook Page now, instead of just seeing a wall of information or updates, you’ll first notice how many friends of yours already like the Page. You’ll also see highlighted activity from your friends that’s relevant to the Page, whether it’s a check-in or a story about the brand.

“You can very quickly see what your friends think about the organization,” Rajaram continued. “Pulling friend activity… is going to be one of the more powerful aspects.”

As Lessin noted, “Friend activity makes things better and leads to higher engagement.” It gives the average Jane or Joe an immediate reason to feel connected to a branded Page, and it starts the storytelling off on a more personal note than before.

After highlighted friend activity on Pages, the second-most important aspect of the new Pages is likely going to be the new admin panel. The panel will appear at the top of any Pages you manage, and it will act as a sort of activity snapshot for notifications, post performance and stats, and messaging.

Previously, Pages didn’t have the ability to send or receive Facebook messages — an inconsistency that Lessin said troubled the social network’s designers and developers. With the new Pages, admins will be able to respond to messages from everyday users.

Admins won’t be able to proactively send messages, which could quickly lead to Page spam in your Facebook inbox, but the new capability is a welcome tool for continuing user-initiated conversations and responding to questions.

In addition to stats and notifications, admins also now have the ability to cherry pick “pinned posts,” which will appear at the top of the Page’s Timeline for up to seven days.

“A pinned post is a way for the Page to indicate the ‘post of the week,'” said Rajaram. “For example, Livestrong is highlighting a post from two years ago.”

And just like you, the normal Facebook user, Page admins can now select activity to highlight in full-page-width posts with larger images and videos, which Rajaram said will “enable organization to tell their stories in much more engaging ways.” 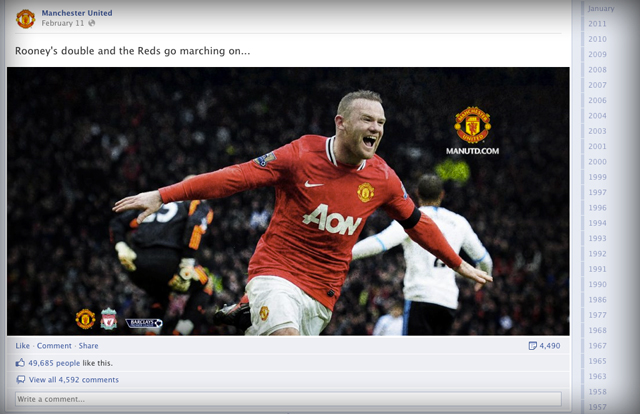 Also, just like you and me, Page admins will also be able to add “life events” for their organizations. For individuals, a life event might be a child’s birth or a job change; for organizations, it could be a new store opening, an award, a new product launch, or a founding. Basically, it’s all revolving around Facebook’s new approach to creating better profiles through structured data.

These milestones can even take place before the Page was first created. For example, the Manchester United soccer team’s Timeline starts in the 1870s with a full-width black and white photo of athletic-looking dudes with hipster mustaches, a memento of the club’s founding. The Livestrong Timeline begins with a video of Lance Armstrong’s press conference the day he announced to the world he had cancer. 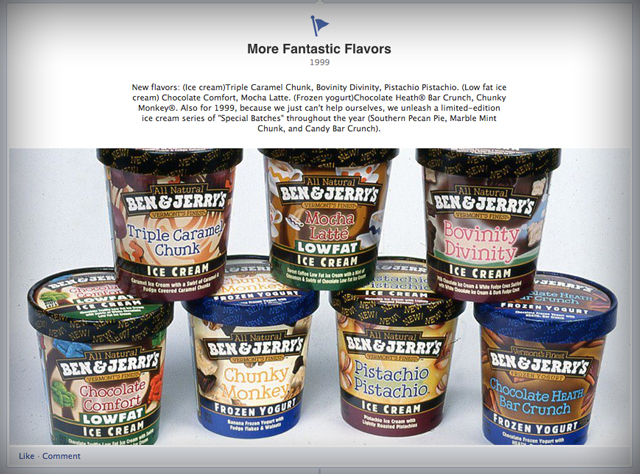 All this data — these stories — are fully curated by Page admins, allowing brands, corporations, nonprofits, and others to have even more control over how their stories are told on Facebook.

Sticking it to the Man: Anti-commercial controls

Interestingly, as much control as Page admins will now have, they won’t be allowed to use their new powers for evil. For example, Facebook isn’t allowing Pages to include calls to action or overtly promotional text in cover photos. Your Page could include a logo or an image of your location or your staff in the cover photo, but it couldn’t say something like “Get 40% off today only” or “See more at our website.”

“The key with cover photos is storytelling and expression,” said Lessin. “We want to create a good experience for everyone, and we think these guidelines really help brands… They’re encouraging people to create engaging content that people want to come back to and create and emotional connection with.”

Rajaram echoed the concept that positive emotion and overt commercialism are opposed forces, saying, “Brands don’t want to be overly promotional; in the long-term, they know it’s a turn-off to people… They want to have a deeper connection.”

If that leaves you feeling all warm and fuzzy, follow the money for a moment: Facebook makes its money from brands buying ads on Facebook. In giving brands a huge bit of new real estate via the cover photo, Facebook stands a chance at losing some of that ad money. Marketers love and live by calls to action, so if calls to action are illegal in Page cover photos but legal in Facebook ads, marketers will still be shelling out for Facebook ads to the tune of billions each year. But let’s get back to the warm and fuzzy part.

“A lot of brands aren’t great storytellers, but the best ones are,” said Lessin, noting that with added friend activity, the new Pages are better at representing “the story of your relationship with the organization. Those types of moments and vignettes are how you associate with the brand.”

The long and winding rollout

The new Facebook Pages will be in preview mode over the next 30 days — a significantly longer preview than the week-long period given individual users. During that month-long period, admins will have ample time to craft, prune, and curate the Timelines and highlighted stories so that the organization’s message is told powerfully and visually.

“We’ve been focused on giving tons of notice,” said Lessin. “It really helps in terms of people understanding what’s coming.”

By Wednesday, March 7, all Pages should have been notified of the preview and curation period. The new designs will be rolled out by March 30.