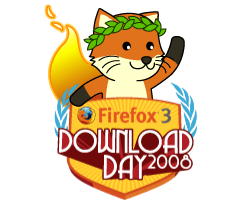 Hey kids, it’s past midnight on June 17th and you know what that means: It’s Firefox Download Day! In a few hours, the latest iteration of the insurgent web browser, Firefox 3, will be unleashed upon the world.

Mozilla, the makers of the browser, want to set the Guinness World Record for most downloads of a piece of software in one day. There is apparently no set number to beat as of yet, but Firefox 2 was downloaded 1.6 million times in its first day, so Mozilla is aiming higher with Firefox 3: 5 million.

The number of committed download pledges is closing in on 1.5 million, but you can be sure that significantly more people are going to be downloading it than just those who took the time to pre-commit to do so. 5 million may seem bold, but the browser has become very popular all over the world.

Firefox 3 has made significant gains worldwide against its main rival, Microsoft’s Internet Explorer. The browser should surpass a 20 percent market share sometime next month (if not sooner with this event). This would be a huge accomplishment considering that IE controlled well over 90 percent of the market as recently as 2004.

I’ve personally found the beta versions of Firefox 3 to be much better performance-wise when compared to Firefox 2. This is especially true for the Mac OS X operating system.

Once the clock strikes the correct time in your area of the world, you should be able to find Firefox 3 here.

You can also get updates on the day via Twitter.