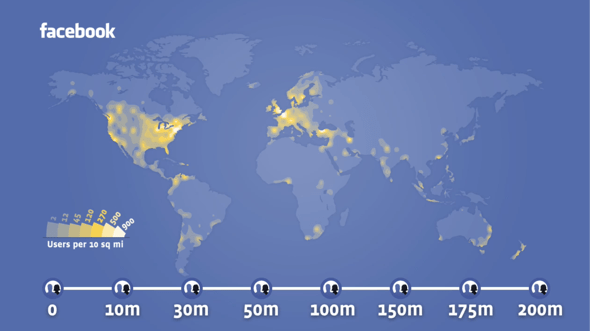 Third-party analytics firms haven’t successfully figured out how to track Facebook traffic. They tend to vastly overestimate the site’s traffic in relation to the company’s own numbers. So when Facebook updates a variety of metrics about how people are using its site — something the company does every month or two, and most recently today — you can get a fresh view of what’s happening by comparing the new numbers with the old ones.

First, the news that Facebook is highlighting now is that it will reach 200 million worldwide monthly active users sometime today. It’s matching this milestone with a promotion where a number of charities are beginning to sell virtual goods in Facebook’s gift store, keeping most of the money they bring in. Those who follow Facebook’s growth closely will note the company has actually been mentioning 200 million users since late March, although the number may have been an approximation before today. In late February, back when Facebook officially claimed 175 million monthly active users, Zuckerberg said the site was growing by five million people worldwide per week, with one million of those in the United States. So overall growth seems to be holding steady for now — apparently regardless of a redesign released in the middle of last month that many have bombed.

The other new numbers Facebook is making available today are positive but muddled by imprecise time frames and definitions. Below, I compare the latest numbers to those Facebook reported in mid-December (here) and in early February (here).

In terms of general growth, the company says more than 100 million users are logging in at least once a day — that’s at least half of its overall user base, as the company has been saying since the site was far smaller. As of today’s numbers, more than two-thirds of Facebook users are not in college, and the fastest-growing age group is 35 years and older. Facebook last updated those stats in December, when it claimed more than 140 million monthly active users. At that time it said that more than half of its users were not in college, with the fastest growing demographic group being ages 25 and up. So growth over the last few months has skewed especially old and not in college, it would seem.

(By the way, Psuedo-rival Twitter has shown most of its growth among those ages 25 to 54, according to a comScore report yesterday. The two companies seem to be competing most fiercely for adults — although Twitter is by all accounts much smaller.)

As in December, Facebook says that more than 70 percent of its users are outside the US. But it has boosted the number of translated versions of the site from 35 to 40 in the intervening time. Also, in December it had 60 in development; today it has 50. I guess five languages got dropped?

Also, new to Facebook’s statistics page today is a mobile section. More than 30 million users are accessing the site through a mobile device every month, and these people are 50 percent more active than web-only users. Mobile is a key way that Facebook is aiming to grow around that world, and to that end more than 150 mobile operators in some 50 countries are in the process of deploying and promoting Facebook mobile products, the company says.

When it comes to how people are actually using Facebook, a few other numbers have, not surprisingly, been going up since the company last updated them in early February — more users generally means more overall site usage. More than four million users are becoming fans of Facebook’s public profile pages every day, up from 3.5 million in February and up from 2.5 million in mid-December. Pages are a main way that Facebook is looking to make money. Advertisers can create a page for free, then buy advertising for other parts of the site that encourages people to become fans.

Facebook’s Twitter-like status updates have also seen more use, with some 20 million users updating their statuses at least once a day, up from 15 million in February and 13 million in December. If Facebook hopes to get people using this feature instead of using Twitter, it seems to be on the right track (except, of course, for the fact that the above number most certainly includes people like me who automatically feed their tweets into Facebook using Twitter’s Facebook app).

Meanwhile, the average Facebook user has 120 friends on the site — the same as the company reported in February and up from 100 users in December. In total, users spend 3.5 billion minutes on the site each day, up from 2.6 billion when that number was last updated in December.

Overall, it’s hard to tell exactly how these measurements of engagement are changing (or not) because Facebook is adding so many new users, keeps introducing interface changes that affect how people use the site, and publishes internal statistics only irregularly. 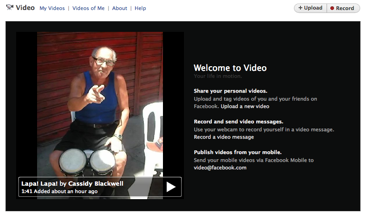 Facebook is one of the largest photo-sharing sites in the world (ImageShack is holding on to the number one spot for now, apparently). Some 850 million photos are uploaded to the site per month using the company’s in-house photo-sharing application, a number unchanged since February but up from 700 million in December.

Or maybe not? More than eight million videos are being uploaded each month, Facebook now says. It hasn’t previously disclosed the number of videos shared per month, although the company told NewTeeVee last week that it’s getting “415,000 video uploads per day, with 155,000 of them directly from webcams.” Perhaps the number of shared videos is spiking?

What about third-party applications?

We still don’t know if the platform is growing, from these numbers, but Facebook offers a new data point today: More than 5,000 applications have at least 10,000 monthly active users.

What’s maybe more interesting is that Facebook Connect, a service launched last fall so other sites can more easily share user data back and forth with Facebook’s home site, is now live on more than 8,000 sites. However, we don’t know how many monthly active users Connect has, a topic I explored in a separate post yesterday.

Are there any conclusions here?

Yes. Analytics firms like Compete and comScore have yet to provide convincing numbers about Facebook. Meanwhile, Facebook itself has yet to present a standardized set of statistics to the world. Until the company or outside parties provide granular, standardized believable data sets, those of us who are trying to figure out what’s actually happening on the site are left trying to triangulate disparate pieces of information. Questions like “Is Facebook’s latest redesign helping or hurting its traffic” are still unanswered.

Perhaps the best sources are the data services provided by Facebook-focused blogs InsideFacebook and AllFacebook, which independently collect some data about Facebook as well as third-party activity on its platform. Justin Smith of InsideFacebook, for example, calculated last December that Facebook would hit 200 million users in late March. And AllFacebook’s Nick O’Neill estimates that the current number could be even higher than what Facebook is reporting today.