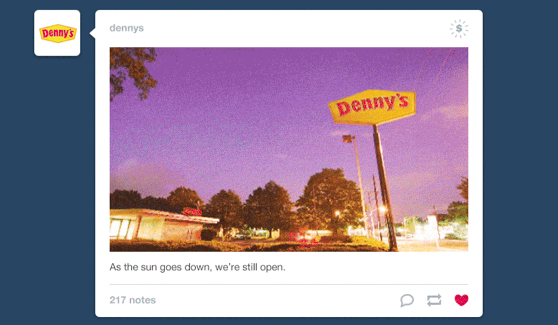 For Tumblr fans, May has been one nightmare after another

Less than two weeks after Yahoo shelled out $1.1 billion for Tumblr, the social network is getting its first batch of web advertisements. And while the move was in motion long before the Yahoo acquisition, it probably doesn’t look that way to paranoid Tumblr users.

The new ads, which Tumblr calls “Sponsored Web Posts,” work just like Tumblr’s recently launched mobile ads: They’re marked with dollar signs to separate them from other Tumblr content, and you will see a maximum of four of them per day.

For brands, the ads represent a blank canvas for companies to try out new and different advertising techniques. Denny’s, for example, is advertising its restaurants using a very Tumblr-like gif.

According to Tumblr sales VP Lee Brown, sponsored posts have been “liked” and reblogged over 10 million times so far, which, in theory, means that Tumblr users are engaging with the sponsored posts as if they were any other kind of content. And that’s exactly what Tumblr and its advertising partners want.

Of course, all of this is huge for Tumblr, which only earned roughly $13 million last year. More, Tumblr’s likely to be under even more pressure to increase that revenue now with its new Yahoo overlords. Let’s just hope that doing so doesn’t drive away Tumblr’s users, who are already lamenting the latest development. Apologies for the profanity. 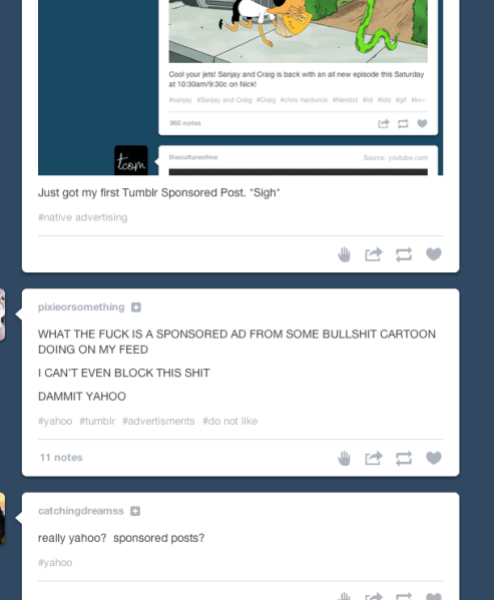