The new functionality is aimed at fostering better GIF discovery.

Users will now see three options for viewing GIFs in search results: grid view, list view, and the new TV view. The TV view expands GIFs to occupy the whole browser screen and plays them one after another. Below the viewing screen is a control that lets users fast-forward to the next GIF, view the previous GIF, or pause on the current GIF. Users can also go directly to the Tumblr TV page to see a stream of trending GIFs. 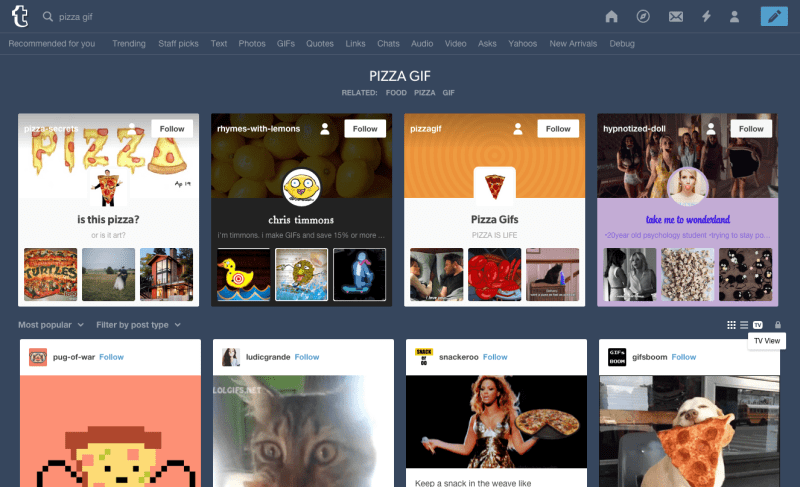 Tumblr users can also create their own Tumblr TV channel by appending their username to the end of the Tumblr TV URL, like so: tumblr.com/tv/@yourblog.

The new Tumblr TV is very reminiscent of Giphy’s TV platform, which also serves up trending GIFs as well as a variety of popular channels like “Beyonce,” “The Simpsons,” and “Cats.” Giphy is a database of GIFs that can be embedded and shared on social networks like Twitter and Tumblr. But it’s clear that Tumblr wants users to be discovering and sharing GIFs within its ecosystem, rather than through third parties.

Earlier this year, Tumblr announced its own GIF search engine, which hunts through its roughly 112 billion posts for relevant GIFs based on keywords. The new TV view and webpage could help the blogging platform develop a reputation as a content discovery tool, furthering user engagement beyond blogging.