Music curation social network Turntable.fm is developing a mobile application for Apple’s iOS devices, according to a report from TechCrunch.

Turntable.fm turns its users into DJs who can share musical tastes within specific virtual rooms classified by subject or genre. Only five DJs can share music in a single room, but anyone can enter a room to listen. All users within that room can rate song selections as “Lame” or “Awesome.”

After extensive testing by dozens of people for about a month, the company wants to release the Turntable.fm iOS app next week, according to the report. The report also notes that streaming music over a WiFi connection is working fine, but there are still problems when streaming music from a 3G connection (as provided by wireless carriers like Verizon and AT&T).

As indicated in the screenshots (below) obtained by TechCrunch, the application itself adopts nearly the exact functionality as its desktop counter-part. Integration with Facebook and Twitter are still prominent in the iOS version, but links to digital music services (iTunes, Spotify, Rdio and others) seem to be missing at first glance. However, it’s possible those links will pop up on the device by touching a specific portion of the screen. In any case, they aren’t in the screenshots.

Turntable.fm’s entrance into mobile devices is a big step for the company because it is now able to compete on even ground with other music startups such as Pandora, Slacker Radio and Spotify.

Turntable.fm gained over 300,000 registered users just two months after its launch in May 2011. The startup, which was founded by Seth Goldstein and Billy Chasen, raised initial angel funding from Chris Sacca. More recently the company reportedly closed a $7.5 million round of funding led by Union Square Ventures. 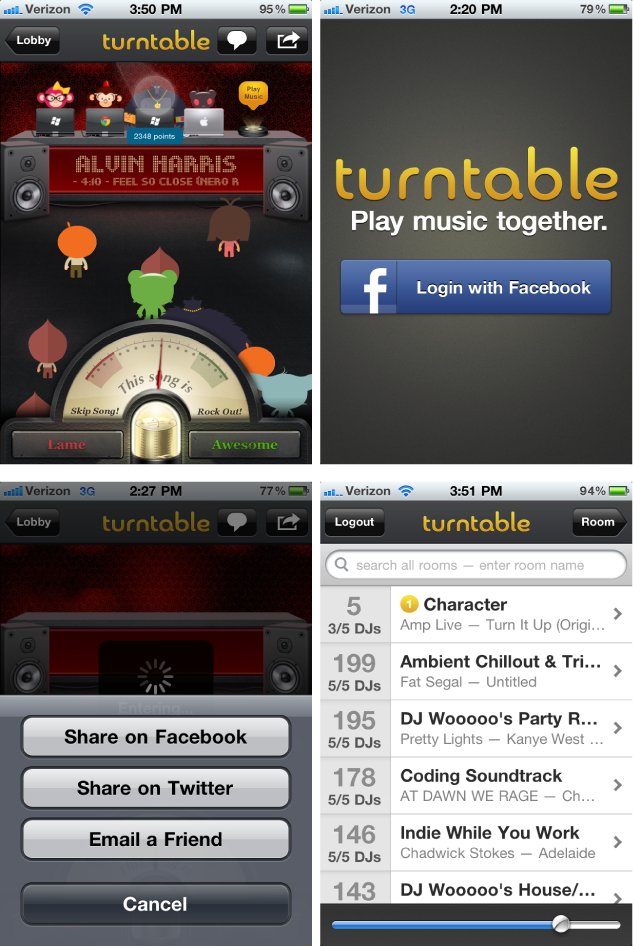