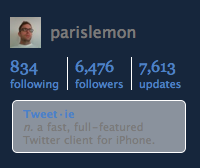 Earlier today we reported on what looks to be Twitter’s first real foray into making money: highlighted third-party sites on Twitter’s main web site. This evening, Twitter rolled out the first such deal with ExecTweets, a Twitter business executive site built by Federated Media and sponsored by Microsoft. But alongside that roll-out were two surprises: Twitter was also featuring Tweetie and Twittervision.

Tweetie is a third-party iPhone app; Twittervision is a third-party site that places tweets on a world map and updates in real-time. Both are excellent apps, but is Twitter gaining anything for featuring them on the site like it is with ExecTweets?

“We’re highlighting Tweetie and Twittervision along with ExecTweets because we want to support and promote projects that deliver variety, relevance, and most importantly, value to users,” Stone wrote to me in an email. He continued, “[We’re] looking forward to doing more like this in the future as there is an entire ecosystem of great projects out there and this is an easy way to start.”

I wrote back to confirm that Twitter was not in some sort of financial relationship with Tweetie or Twittervision, and Stone confirmed that it was not.

So, that’s one part business, two parts fun for Twitter — all in a day’s work. Perhaps tomorrow it will let John Mayer use the sponsored area to write an apology to Jennifer Aniston for being too addicted to Twitter.