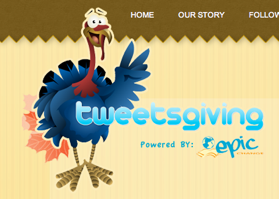 With a few hours to spare, TweetsGiving, a web-based project set up to help build a classroom in a Tanzania school has surpassed its goal of raising $10,000. What’s interesting is how word spread about the project: through the micro-messaging service Twitter.

The initiative, started less than two days ago by Epic Change, a nonprofit organization, leveraged the Thanksgiving holiday and a simple premise to reach its goal. First, it asked that people tweet (a Twitter message) out anything they were thankful for and include the #TweetsGiving tag and a link to the site. A quick scan on Twitter Search shows hundreds if not thousands of these messages out there with still more coming. Second, the project asked for a donation in honor of whatever you were grateful for. These donations, done through PayPal, allowed you to buy a brick in the new classroom for $10 or become a “Top Turkey” for $100. And third, it asked that you follow @TweetsGiving on Twitter and help spread the word through other means (blogging, Facebook, etc.).

As it stands right now, TweetsGiving has raised $10,581 dollars, equaling 105 percent of its stated goal. There’s still a little bit of time to give if you’re so inclined. I’m sure the money will be put to good use in Tanzania.

From crowd-sourced last-minute fundraisers to the quick dissemination of news about the terrorist attacks in Mumabi, Twitter is certainly proving its worth this Thanksgiving season.