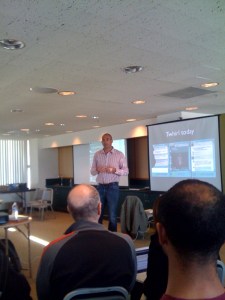 I’m here at headquarters of San Francisco video blogging company Seesmic for the launch of Seesmic Desktop, the next step in the company’s product offering.

The product is a revaming of the popular Twhirl, which was one of the first third-party Twitter clients, and which Seesmic purchased last year and has continued development on. Twhirl is another one of those services that makes it easier to tweet, for example letting you shorten URLs in your messages. The new client, Seesmic Desktop, is a complete re-write of Twhirl.

Seesmic asked for feedback from its growing community for what it wanted to see in Twhirl. One of the most common requests included allowing all the different services Twhirl supports (it now supports more than just Twitter) to exist in one window. Another was adding support for grouping users together. Another another was adding column support — something which has been very popular in the Twhirl competitor, TweetDeck. All of these are included (or will be included) in Seesmic Desktop.

So now, TweetDeck and Seesmic Desktop are going head to head as the stand-alone Twitter clients that support other services on the side.

It’s important to note that Seesmic Desktop doesn’t support anything beyond Twitter yet, though. This early preview build of the software is meant to focus on making itself the best stand-alone Twitter client with all the requested features, but soon it will add support for Seesmic video comments (of course) as well as Facebook support, and other unnamed services, Seesmic founder Loic Le Meur says.

Interestingly, Twhirl has supported FriendFeed, but that isn’t being included in Seesmic Desktop (at least not right now). It seems to me that this new product is a bit like FriendFeed in that it uses filter-like lists for aggregating data. But also, Seesmic Desktop clearly wants to provide a unified way to communicate with various services, eventually.

Also interesting is that when a person in the audience asked if Seesmic would continue to support Twhirl as a separate product, LeMeur clearly didn’t want to come out and say it, but it would seem that Seesmic Desktop will be the area of focus going forward. He noted that Twhirl is hard to say, hard to spell and that it doesn’t own the “.com” domain for it. 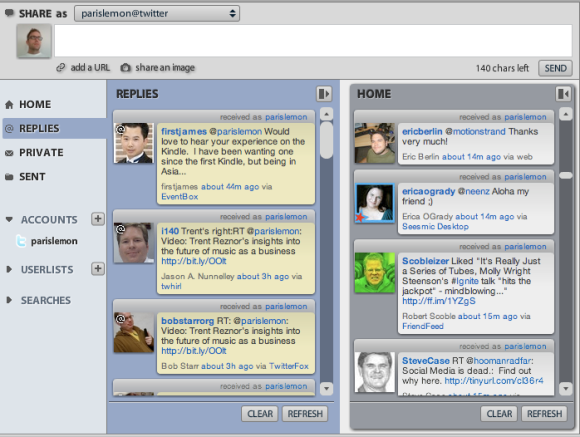