Twitter traffic is growing by more that 1,000 percent a year, with some pundits estimating the company’s value at up to $1 billion. Monetization remains the sticking point. And while the Twitter folks themselves have yet to present a formal commercial model, plenty of smaller players (even the dogs) are vying to use the service to turn a buck.

There are literally hundreds of new ventures looking to take advantage of Twitter’s API — nicknamed Twisinesses (how cute is that?). But even the most popular among them are still finding it difficult to make a living. To weigh the challenges and opportunities in the space, here’s a who’s who of some of the most promising Twitter enterprises to date:

ExecTweets
Blog advertising network Federated Media launched Exectweets with partner Microsoft (and the blessing of Twitter itself) to aggregate 100 executives’ Twitter accounts. Its “best of” site, which streams the most interesting tweets from this caste, has about 35,000 followers. The company runs ads from Microsoft on its Twitter site to make money, and may soon recruit other advertisers into its elite fold. That being said, the banality of some of the content on ExecTweets has prompted negative responses from readers that seem to have expected a higher caliber of conversation. This could hurt the service in the long run when it comes to holding onto its potentially lucrative audience. 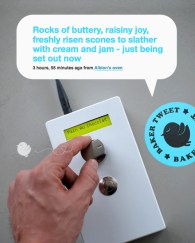 BakerTweet
This company has taken Twitter marketing to the next level, creating a special device just for this purpose. It offers a wi-fi enabled “bakery-proof” box that lets bakers send auto-messages out to their Twitter sites every time a batch of croissants or cupcakes comes out of the oven. The device draws from a pre-written pool of messages, so it doesn’t mire busy bakers in the time-suck of microblogging. The sleek contraption was created for the company by London design firm Poke. The idea is to sell them for a yet unspecified amount. The obvious caveat: a very narrow market. It’s unclear how nerdy or tech-savvy bakers are these days. Then again, the company’s first customer, a bakery in London, claims the service has led to some its items selling out.

SendSocial
This venture enables Twitter users to send each other gifts from any third-party retailers. Basically, it makes it possible to send physical items to others with virtual identities — without the recipients having to disclose their actual addresses. It works like this — one user signs up, pays a small fee, and specifies what gift he wants to send and to whom (@giftrecipient, for example); @giftrecipient receives a tweet notifying her of the gift and asking her to follow @sendsocial; that done, @giftrecipient gets a direct message with a uniquely generated code to enter into the SendSocial web site; there, she can see the details of the package and has the option to either decline or accept and provide her own address. The original user sends the package off to SendSocial, which checks its contents and forwards it on to @giftrecipient. This service is similar to predecessor Tipjoy, which allows users to send each other money (it says it will turn a profit this year).

Magpie
As one of the major advertising players in the Twitter space, Magpie co-opts its members’ followers to create marketing distribution networks. It pays its users a fee based on the number of followers they bring in and marketing tweets they put out. Magpie says it is profitable after only five months with a reach of 5.5 million and advertisers like Apple, Expedia and Whiskas (cat food). CPMs range between a few cents and $4. The possible drawback here is that if too many services like this join the game (Twitter Traffic Machine already does something very similar), a deluge of marketing tweets might start to feel a lot like spam. To avoid this, Twitter-based advertising agencies will need to be a lot more subtle in their approach.

Twitter Partners
This enterprise says it is “building a suite of apps, tools and services to help brands, media companies and celebrities harness the power of the Twitter ecosystem.” It attracted a lot of buzz several weeks ago when it first launched — partly because it announced ties with Virgin Media, Universal Pictures and Warner Brothers, and partly because it is affiliated with marquee entrepreneurs like Martha Lane Fox and Brent Hoberman and venture capitalists like Saul and Robin Klein. These are boons, to be sure, but the service may still be overhyped (to its detriment). Twitter isn’t a partner at this stage, and its publicity prompted a cold note from Biz Stone stating that “the name, branding and suggestion that Twitter has some kind of equity partnership or an agreement of any kind in place [with Twitter Partners] is misleading and wrong.” Ouch.

As innovative and attention-grabbing as these efforts may be, most seem to be running into the same issues that Twitter itself faces with user retention. After Nielsen Online vice president David Martin revealed that more than 60 percent of Twitter users never return to the site after their first month of signing up, he followed up last week with new figures tracking the most popular applications and web sites that feed into Twitter, like TweetDeck, TwitPic and Tumblr — the upshot: lackluster retention figures across the board.

And what about Twitter proper? At this point, little has been said about how it might profit from the ventures that make use of its platform. But that could change soon. After all, Twitter is powering the ExecTweets service hand-in-hand with Federated Media. On top of that, MTV is launching a new show that asks users to send messages to its host via Twitter and Facebook. One MTV executive described the program as a joint venture with Twitter. Presumably, these types of deals will eventually yield significant revenue share and advertising sales. With the general consensus that Twitter is one big untapped opportunity, there will be no shortage of partnership opportunities for the site in the year or two to come.