The information was revealed as Twitter mentioned the dates when employees who are not executives will be able to sell their stock — Feb. 15, 2014, after the typical lock-up period expires.

The typical lock-up period for employees to sell Restricted Stock stock to cover tax obligations due upon vesting is typically 90 days after an IPO. In an earlier version of the S-1, Twitter’s IPO advisors slipped up and inadvertently revealed the end-date for the lock-up period as the fixed date of FEBRUARY 15, 2014 (rather than leaving the date blank as most filings do until right before the final pre-Roadshow S-1 amendment, when the IPO date is announced).

The accidental date reveals for the first time that Twitter plans to IPO on November 15, 2013 … The revelation was an accident …

Clearly, Twitter’s had a lot on its plate preparing for the IPO, but this is a bit of a surprising oversight — one that might be indicative of perhaps a hasty process:

Other changes in the prospectus revealed today indicate that mobile became more and more important to Twitter over time, and that — as we’ve covered previously — Twitter’s biggest risk is its international growth.

Use of the word “mobile” increased each time Twitter revised the document, PrivCo says, rising from 91 in the first version in July to 131 in the latest version: 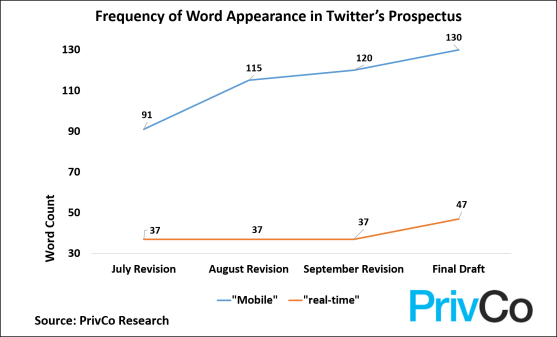 However, most interesting, perhaps, is that Twitter significantly boosted the warnings issued to investors regarding its biggest risk: international. Users outside the United States constitute a massive 77 percent of Twitter’s monthly average users, but they provide only 25 percent of Twitter’s revenue.

Those users are simply harder to monetize, particularly when they’re in developing countries.

So Twitter had to add new language to its S-1 that indicates that advertising revenue per timeline view in the U.S. was $2.17 in recent months, while the same number for the rest of the world was just a small fraction of that: $0.30. 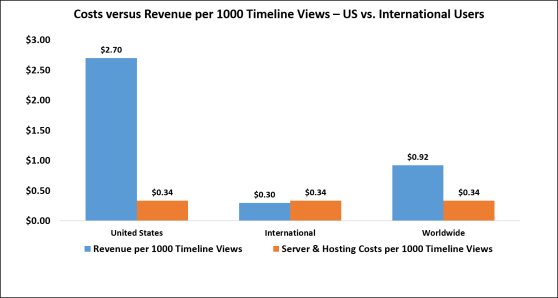 Those details, PrivCo says, are what savvy investors will increasingly learn as they not only read the final and complete versions of companies’ prospectuses but also review the “Draft Registration Statements” that the SEC requires companies to release in tandem with the S-1 … and which reveal changes made over time to satisfy regulators’ compliance requirements.