Twitter’s very bad week has a glimmer of hope, thanks to a new study from Harvard’s Institute of Politics that shows teenagers might — just might — be latching on to Twitter.

When asked “What is the one website, social network, or app that you could not live without?” Facebook was the clear winner at 24 percent for students of all ages.

Google came in at a distant second with 7 percent, and Twitter was in third place with 3 percent.

But perhaps the most interesting finding was that high schoolers were twice as likely as college students, and 6x more likely than graduate students, to say they couldn’t live without Twitter.

Thirteen percent of high schoolers can’t live without Twitter — exactly the same proportion as say that about Facebook.

This could be good news for Twitter, which only managed to bump its number of users by 5 percent (to 255 million) from December (when it had 241 million users).

Maybe high schoolers like Twitter because Facebook is soooo last generation, or because they’re particularly drawn to professing their love of Justin Bieber in less than 140 characters.

Another interesting finding is that while many of the social sites have a liberal bias, Republicans are totally winning at Pinterest (40 percent Republican vs. 32 percent Democrats). Happily, both Facebook and Snapchat are bastions of bi-partisan goodness. 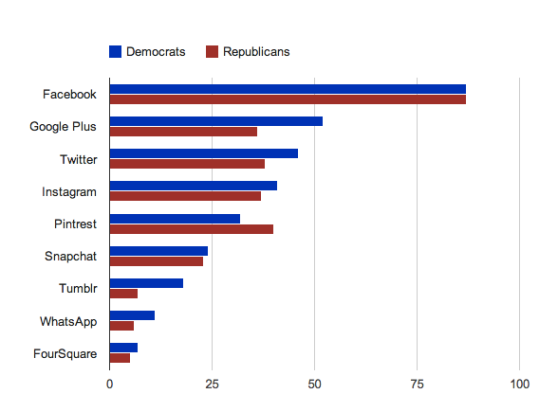