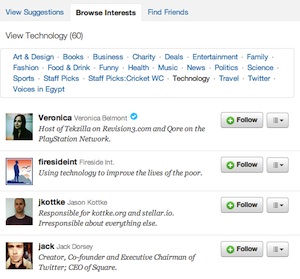 Over the past few years, Twitter has experimented with different ways to help users find other users worth following — after all, Twitter is only as interesting as the people you follow. Today, the company unveiled a new set of user recommendations based on subject.

Now, when I select the “Who to Follow” section that was introduced last July, there’s a “browse interests” tab that recommends people to follow in areas like “Art & Design”, “Books”, and “Technology”. There’s a similar option when you search for different subject keywords. Twitter said that previously, if you searched for “hip hop” you’d only see users who included those words in their account description. Now, you’ll find popular tweeters in each subject area, regardless of keyword.

It’s not clear how these users are chosen. I asked a company spokesperson earlier this afternoon whether they were hand-picked by Twitter or selected through some algorithm, but I haven’t heard back yet. (I’ll update if I do.)

Besides being a way to help users, especially new users, become more engaged on Twitter, this feature could also provide a new opportunity for revenue. Last fall, Twitter launched a “Promoted Account” option as part of its advertising program, where companies could pay Twitter to promote their account to some users. Twitter says it doesn’t just show a company’s account to every user. Instead, it will “highlight your account to users most likely to find it interesting.” It seems like Promoted Accounts might fit in for these user recommendations — I could imagine a company wanting to advertise its account at the top of the “tech” user list, for example.

Klout co-founder and chief executive Joe Fernandez told me: “We do have much more in-depth analysis related to topics. I think what [Twitter is] doing is a great tool for helping mainstream users discover new people/content.”

In addition to launching the people-recommendation feature, Twitter also announced today that it will start driving more users to its advanced search — now, when users perform a search on Twitter, they’ll see a link to the advanced search page.

Update: Here’s how a Twitter spokesperson explained the process for putting together its recommendations:

When you search for a topic or interest, we return users based on an algorithm. That algorithm looks at a variety of factors, including your profile information, engagement on Twitter, who you follow, and who follows you, among other things.

When asked whether this might provide a new venue for Promoted Accounts, the spokesperson declined to comment.