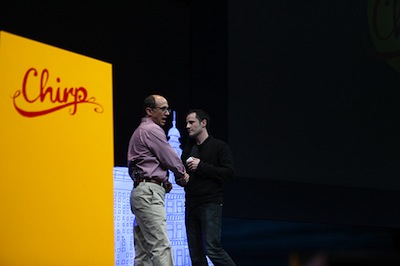 The swap seems to reflect a growing emphasis on turning Twitter into a profitable company — after all, Costolo has done most of the talking about Twitter’s advertising model. That’s basically what outgoing CEO Ev Williams says in a post on the company blog, though he also emphasizes the fact that he wants to focus on product development:

Growing big is not success, in itself. Success to us means meeting our potential as a profitable company that can retain its culture and user focus while having a positive impact on the world. This is no small task. I frequently reflect on the type of focus that is required from everyone at Twitter to get us there.

This led to a realization as we launched the new Twitter. I am most satisfied while pushing product direction. Building things is my passion, and I’ve never been more excited or optimistic about what we have to build.

This is why I have decided to ask our COO, Dick Costolo, to become Twitter’s CEO. Starting today, I’ll be completely focused on product strategy.

The CEO announcement comes right after Twitter announced the expansion of its (relatively young) advertising efforts with a new feature called Promoted Accounts.

Williams’ post also shares some stats about Twitter’s growth: The company now has 300 employees and 160 million registered users, and those users create about 90 million tweets per day.

And here’s a statement from Costolo, sent over from Twitter via email:

I completely respect [Williams’] decision to focus on product strategy and vision. As we’ve all see[n] with the new Twitter, when Ev focuses on product, something amazing can happen. I’m certainly excited to be taking on this role. You couldn’t ask to take a job like this at a better time — the team is incredible, we have awesome stuff in the pipeline, and we’re ready to accomplish more in the next two years than we’ve accomplished in the last four.