Twitter is testing an analytics dashboard that will help users, especially corporate users, figure out what’s is and isn’t working in their usage of the microblogging service.

Mashable first reported the test and published a couple of screenshots (I’ve reproduced one below). The screenshots show one section for tracking general activity on your account, including how many times you have been mentioned, followed, and un-followed. It also shows which of your messages posted to Twitter seem to have gotten the best response, based on the number of users who marked it as a favorite, retweeted it, and replied to it.

There’s a separate page for Promoted Tweets (which is one of the forms of advertising sold by Twitter sells) showing how often the message has seen, clicked on, retweeted, and replied to.

When I asked Twitter about the report, a spokesperson confirmed the test via email:

We gave a very small group of Twitter users access to a simple and straightforward analytics dashboard, as part of an alpha test. This first group of testers includes users who have worked with Twitter and are doing interesting things with their Twitter accounts. We’re experimenting with tools like this to give users insight on how to make their Tweets more compelling for Twitter users, and we don’t have a timeline for wider distribution.

There’s a strong corporate demand for better monitoring and analytics tools, and we want to help developers take advantage of this significant opportunity. For example, it was announced today that we partnered with Gnip, which will sub-license access to public Tweets and give developers an efficient way to access the Twitter stream for analytics purposes.

Back in September, Twitter business development executive Ross Hoffman told an audience of marketers that the company was working on an analytics dashboard developed by the team behind acquired analytics startup Trendly. At the time, we were surprised that Hoffman said the service would be free, but free analytics could be indirectly lucrative for Twitter by helping advertisers track their campaigns.

This is shaping up to be a big news day for the company. There are rumors that Twitter is raising more funding at a $3 billion valuation, and co-founder Ev Williams is scheduled to take the stage at the Web 2.0 Summit later this afternoon. 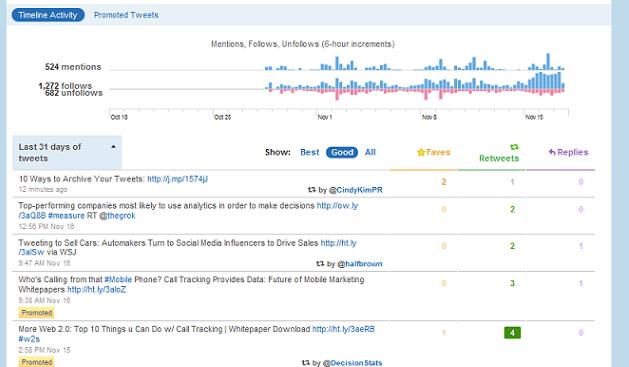