Twitter is looking at letting users add quick polls to their tweets. A company spokesperson confirmed the possibility in a statement to VentureBeat saying, “We’re experimenting with a new way to poll users on Twitter.”

Right now, it looks like polls are only visible on Twitter’s mobile apps and website, not on desktop applications like TweetDeck. There’s no indication of whether this capability will be rolled out to the rest of Twitter’s 316 million monthly active users. It’s still in the experimental stage (meaning it could get shelved), but today’s announcement may certainly signal a move toward a wider rollout. 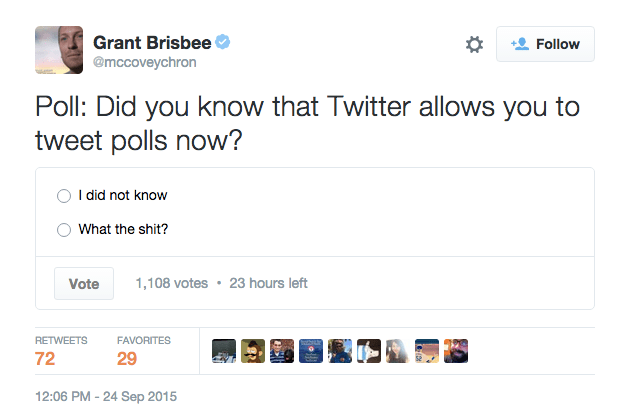 This isn’t the first time that Twitter has tried adding polls to its communications service. Previously, companies were able to poll their followers through custom card polls. In other changes, Twitter revealed in 2014 that it was testing a feature that would enable native ads for publishers.

From what we’ve seen, all polls have a 24-hour time limit on them.

While Twitter declined to provide more information, a quick query on the site indicates that a select group of users have access to this, including Twitter employees, certain verified and non-verified profiles, including those in the media and in sports.